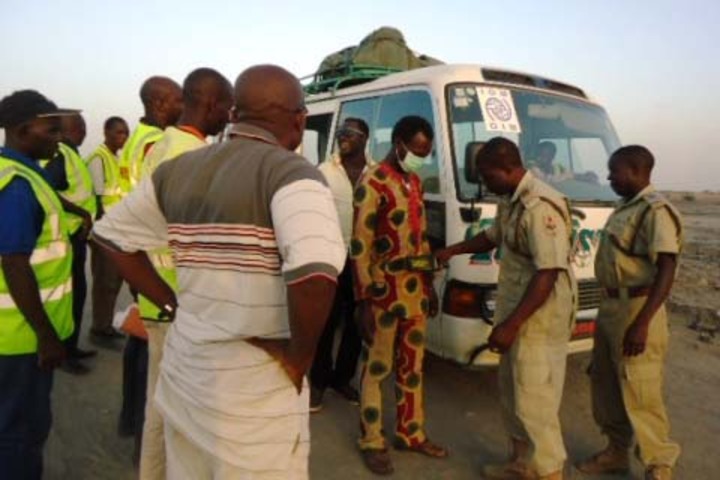 The Nigeria Immigration Service (NIS) says no fewer than 150 Nigerians were disallowed from travelling out of the country in the last four months in the fight against human trafficking.

The Comptroller in charge of the Murtala Muhammed International Airport (MMIA), Lagos, Abdullahi Usman, made this known to journalists, while receiving the management of Access Bank at the airport.

The News Agency of Nigeria (NAN) reports that Access Bank donated office furniture to NIS at the MMIA as part of its Corporate Social Responsibility (CSR) programme.

According to Usman, those refused departure were within the range age of 16 to 40 years.

“They were sensitised on the reasons for their refusal and most of them were satisfied.

“We told them that if they had gone, it would have been a disaster for them. We also ensure they were profiled at the same venue where the returnees were being kept.

“They witnessed the returnees and it became very clear to them. Most of them were innocent of where they are going to, while some of them knew.

“When we came, we introduced anti-human trafficking to look basically into human tracking issues,” he said.

The comptroller said no fewer than 58, 000 visas were issued from January to December 5 on arrival to foreigners who arrived through the MMIA in Lagos.

He said most of the beneficiaries were investors coming into the country.

He said the visa on arrival procedure was targeted at investors coming into Nigeria to do business as part of the Ease of Doing Business policy of the Federal Government.

“We have upgraded our visa on arrival from email-based to web-based to improve our services.

“Applicants can now log into the website and fill in their details and also get their approvals directly from there instead of using a third party which was what we were doing before because they have to send a representative here to process it.

“So, the increase in the issuance is to ease procedure and encourage more investors to come into the country to invest,’’ Mr Usman said.

On airport operations, he said the new Migration Information and Data Analysis System (MIDAS), had been installed at the airport.

He said this was to enable immigration and border officials to process travellers more rapidly and professionally and as well make their border-crossing experience safer and more humane.

Mr Usman said before now, the system was not sophisticated, but currently, the new equipment MIDAS was used to capture 10 fingers of passengers.

He said with MIDAS, the system would ensure that those crossing Nigerian borders did not pose threats to national and international security.

According to him, the process is seamless and effective.

“We just appeal to passengers to exercise some patience in undergoing the process.

“We have increased number of our officers at the airport due to large travellers during the Yuletide season.

“We are fully ready to ensure effective and efficient operations at the airport during the festive period,’’ Usman said.

The Assistant Comptroller-General, Mohammed Alafa, while receiving the management of Access Bank, commended them for supporting the operations of NIS through their donation of office furniture.

In his remarks, the Group Managing Director of Access Bank, Herbert Wigwe, lauded the NIS officials for their effective operations at the airport, assuring them of more support.

Mr Wigwe, represented by Victor Etuokwu, said donation of the furniture to immigration service was borne out of their seamless services at the airport.

He said: “This is part of our company’s contributions to the organisation in Nigeria through our CSR initiative.’’

NAN also reports that MIDAS enables countries to effectively monitor those entering and exiting their territory by land, air and sea, while providing a sound statistical basis for migration policy-related planning.