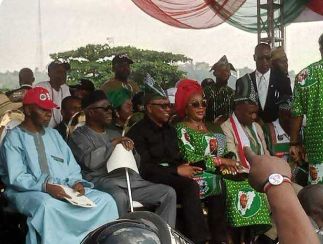 Labour Party presidential candidate, Mr. Peter Obi has promised that there will be free and qualitative education for every Nigerian child if he is elected into office.

This was as the leader of Pan Yoruba socio-political organization, Pa Ayo Adebanjo told hundreds of loyalists of the LP that only Peter Obi has the credentials to fix Nigeria and ensure that the country is restructured according to the wishes of Nigerians.

Leaders of the Labour Party from the wards and local government levels, traders, students, and artisans, amongst others were present at the mass rally of the party that held at the Adamasingba Sports Complex, Ibadan on Wednesday.

The trio of Obi, his running mate, Senator Datti Baba-Ahmed, and Pa Adebanjo reassured Nigerians at the rally that better days lie ahead if they vote for the Labour Party in the 2023 general elections.

”There will be no ASUU strike, poor funding of the universities, payment of exorbitant fees, or insecurity under our government. That is why I am appealing to you to vote wisely, vote Peter Obi/Datti in 2023,” she said.

Obi, who arrived the venue in a white chopper along with top party leaders, said that presently Nigeria is at a cross road, stating that there were adequate plans to address the nation’s security challenges by the party.

In his speech at the event, Pa Adebanjo stated that if Nigerians wanted peace, justice, equity, and fairness, Peter Obi must be elected as the next president of the country, and urged the people not to allow tribalism to influence their votes in the 2023 presidential election.

“To those saying this one is Igbo, that one is Yoruba, the talk of president in Nigeria is not that of the Igbo or Yoruba but the talk of entire Nigeria,” he said.

He said; “The South-West has produced a President and the current Vice President is from the region, the South-South spent a total of six years in the Presidency, but the people of the South-East have never tasted the presidency in Nigeria, and now that the power is due back to the South, equity demands that it be ceded to the Igbos.

“We cannot continue to demand that the Igbos must remain in Nigeria, while we, at the same time, continue to brutally marginalise and exclude them from the power dynamics.

”Peter Obi is an Igboman, whom Afenifere has decided to support and back;; he is the man we trust to restructure the country to federalism on assumption of office.

“We will not compromise the principle of justice, equity and inclusiveness just because one of our own, Asiwaju Bola Tinubu, is a frontline candidate.

“It is on this same principle we condemn the Peoples Democratic Party (PDP) for fielding Atiku Abubakar, a Northern Fulani to succeed President Muhammadu Buhari, another Fulaniman.”

Sack me if you can – Wike Dares PDP