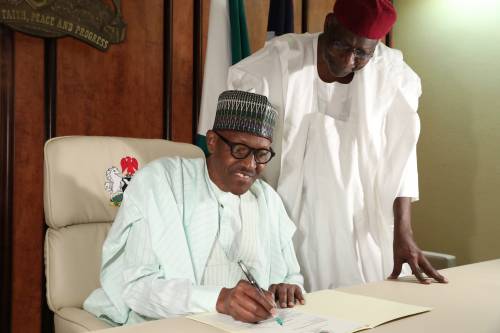 Immediate past Acting Director-General (D-G) of the National Intelligence Agency (NIA), Mr Mohammed Dauda, has disclosed that he fought off attempts by Messrs. Babagana Kingibe, former Secretary to the Government of the Federation and his protégé and incumbent D-G of the NIA, Mr. Rufai Abubakar and Abba Kyari, President Muhammadu Buhari’s Chief of Staff to steal $44million NIA intervention fund.  The disclosure was made in a brief to the House of Representatives Committee on National Security and Intelligence.

In the brief, exclusively obtained by SaharaReporters, Mr. Dauda said he assumed office as Acting D-G on November 6 2017, following a brief meeting with Mr. Kyari at the Presidential Villa. The Chief of Staff, he said, conveyed the President’s directive to him that he should function in an acting capacity while waiting for further directives.

On leaving the Presidential Villa, Mr. Dauda said he headed straight to have a meeting with Mr. Arab Yadam who was D-G in an acting capacity but was retiring. The meeting, he said, dwelt on what the retiring Acting D-G did in the seven months during which he ran the agency. The briefing, said Mr. Dauda, comprised his administrative, operational and technical duties, all of which were highly confidential. Mr. Yadam also gave his successor the picture of the agency’s financial position, which included $44million he informed was part of the intervention fund that brought the Ikoyi apartment cash scandal.

After the briefing, Mr. Yadam introduced Mr. Dauda to Brigadier-General Mohammed Ja’afaru, the Acting Director of Finance and Administration (DFA) who briefed him on the nature of the agency’s assignments. Among these are the daily operations of the accounts for both domestic and foreign management. The Acting DFA also told Mr. Dauda that the $44million in his custody, which was not part of the agency’s budgetary allocation, should not be touched because it had become an exhibit in an ongoing case. The purpose of the disclosure, Mr. Dauda said, was for his information.

Not long after Mr. Dauda assumed office, the Presidential Review Panel (PRP) headed by Mr. Kingibe started its assignment within NIA. The agency provided the members of the panel with office space, accommodation, food and other logistics. Aside from Mr. Kingibe, other members include Mr. Albert K. Horsfall, a former D-G of the State Security Service; Mr. Olaniyi Oladeji, Mr. ZY Ibrahim both former DGs of the NIA and the current DG of NIA, Mr. Abubakar, who was PRP Secretary.

After the maiden meeting with the panel, said Mr. Dauda, Mr. Kingibe called him to advise that in his own interest, he should cooperate with them fully and avoid being close with Buhari’s National Security Adviser, Babagana Monguno, Mr. Kingibe also disclosed that they had presidential powers to overrule previous instructions or directives issued by the NSA.

“I was instructed to channel all our activities, contacts, concerns and complaints through the Office of the Chief of Staff Abba Kyari only,” said Mr. Dauda.

He said the instructions left him in discomfort, as they contradict all the provisions of the agency’s instruments. Not wanting to start on a confrontational note, he kept away from the NSA as instructed.

According to him, things went on smoothly untilKingibe and Abubakar kept pressuring him for money. Mr. Dauda said he explained that the agency’s dollar account was low because of the difficulty in sourcing dollars from the Central Bank of Nigeria following the crises that arose from the Ikoyi money scandal. However, the replied that the $44m in the custody of the Acting DFA belongs to the agency and that the DFA had no power to stop Mr. Dauda from spending the money. They added that since the crisis had blown over, Mr. Dauda should go and tell Brigadier-General Jafa’aru to return to his job in the army. He was advised to write to the National Security Adviser to withdraw him or ask the NIA security department to stop him from entering the premises of the agency.

Mr. Dauda said the pressure was huge, but he felt if Brigadier-General Jafa’aru left, he might not be able to resist further pressure from the desperate Kingibe led gang.

“They kept insisting that they had the mandate of the President and that the President had directed the Economic and Financial Crimes Commission (EFCC) to hands off the money and that it was legitimately ours. They verbally queried me on the logic of keeping the money as an exhibit since there was no case pending in court. Ambassador Kingibe told me that he was the one who, through the Chief of Staff drafted the memo that the President assented to, instructing the EFCC to hands off our case (Ikoyi cash . scandal) just to convince me that there are no more encumbrances on the money,” stated Mr. Dauda.

Still, no dice. He claimed that Kingibe and others kept pressuring and threatening that if he did not get rid of the Brigadier-General, he would have regrets. Mr. Dauda said he had no reason to get the man out and he actually enjoyed working with him. His refusal to do as they wished, he said, this prompted Messrs. Kingibe and Abubakar to tell him at a meeting that he was refusing presidential orders to bar the Brigadier-General from the NIA premises. They warned him that there might be consequences if he remained adamant. At one of the meetings, explained Mr. Dauda, Mr. Horsfall advised him to ignore any suggestion that could cause confrontation between him and the NSA and advised his colleagues on the panel to put it as part of their recommendations to the President since they had his mandate, so he could order the NSA to remove the Acting DFA from the NSA.

The pressure on him for money, the former Acting D-G said, intensified.

“They wanted money for medical treatment or holidays abroad for their families and girlfriends. I met and gave a lady Ambassador Kingibe simply introduced to me as “Angela” money twice at the car park of the Hilton Hotel. Once $50,000 and the second time $20,000, which apparently did not impress him. Even the current DG NIA once called me on WhatsApp, just like Amb. Kingibe always does and said that his Oga was traveling to London for medical check-up and he suggested that I should find something for him as a sign of good will. So, I reluctantly gave him $50,000 against my will, a decision that made me sad throughout the day,” he said. He added that Mr. Kingibe collected over $200,000 from him during the time he headed the PRP. Mr. Dauda said he was always using the President’s name to squeeze cash out of the NIA. They also undermined the Office of the National Security Adviser.

On December 20 2017, said the former Acting DG, Mr. Kingibe asked the current DG NIA to tell him to meet them at home located at 59 Nelson Mandela Street, Asokoro, Abuja. He was asked to come alone. At the meeting, he was told of his refusal to cooperate with them and they had brought him there to warn that the Acting DFA was conspiring with some people to steal the $44million in their safe. He was warned that he would be held liable if he did not stop their plan.

“They told me that their Committee had completed their assignment and that their recommendations were so generous to the DG NIA. They said they recommended the appointment of two Deputy Directors-General and watered down their powers enough so that they will not be in a position to pose any threat to him as the DG,” wrote Mr. Dauda.

They then suggested that it was his turn to do something in return as he was likely to get the President’s nod as the substantive DG only if he could immediately make $2million available.

“I told them it was not going to be possible as the only money available was the $44million and I didn’t know how to approach the Acting DFA. They also told me at the meeting that if I can’t sack the DFA, they would send someone to do it soon. That was my last communication with them until I heard of my removal from office on Wednesday 11 January on Channels Television around 8 pm,’ said Mr. Dauda.

The next day, he advised the NSA to look at the possibility of evacuating the money from the NIA, an advice the NSA heeded. The money was moved and taken to the Office of the NSA.

Later that night, Mr. Dauda said he received a call from the Mr. Abubakar, who requested for a meeting with him and the staff who worked with him at 10pm. Mr. Abubakar said the meeting was ordered by Mr. Kyari. The meeting was eventually moved to the next day after Mr. Dauda protested that it was too late. At the meeting the next day, an enraged Mr. Abubakar said the Presidency blamed him for not taking over immediately thereby giving room for the money to be taken away and warned that Mr. Dauda would be held responsible.

When he finished, Mr. Dauda said he told him no money was missing and that he approved the transfer so the money could be safe.

“I told him that if there was no ulterior motive, the apprehension was unfounded. I also warned him to mind his language as I have always been his senior in this service,” Mr. Dauda stated.

He equally stated that his life is being threatened by the Kingibe gang and requested immediate protection for him and his family. Mr. Abubakar, he said, has already shown his hand with a letter requesting Mr. Dauda to return official vehicles in his possession. He has also received another letter restricting his movement on the claim that the agency was investigating leakage of sensitive information.

“These are acts meant to cow and intimidate me into submission and there are also attempts to bundle me out of my official quarters through extra-legal means and also to withdraw my security details, thereby impacting my security,” he said.

He called on the House Committee not to allow the Kingibe gang to subvert the rule of law by bullying him into submission. 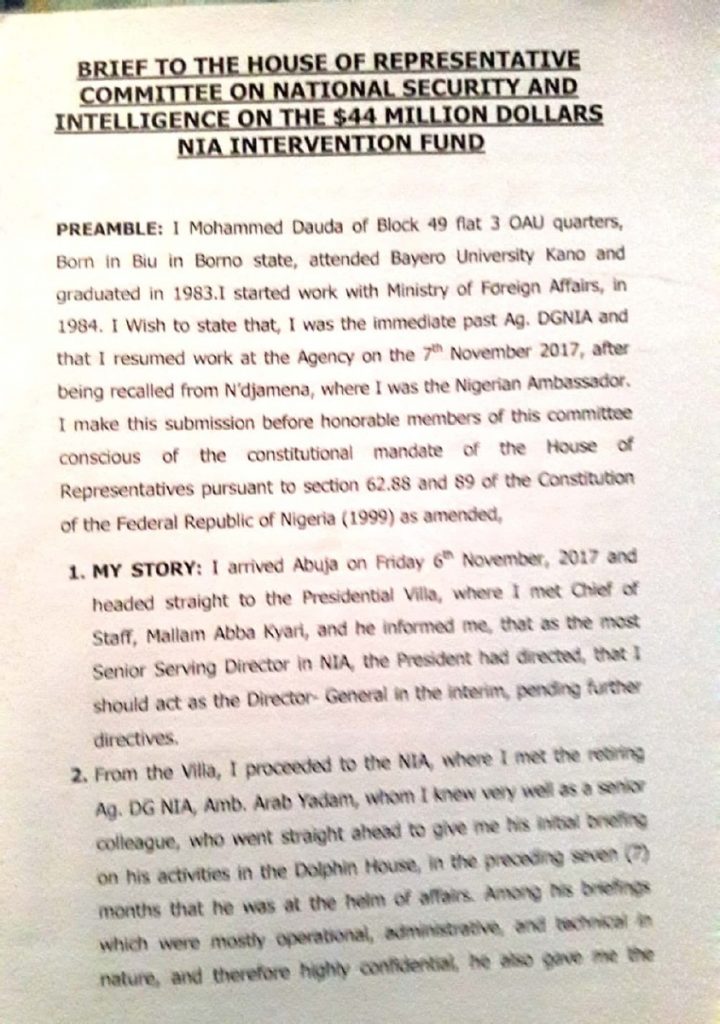