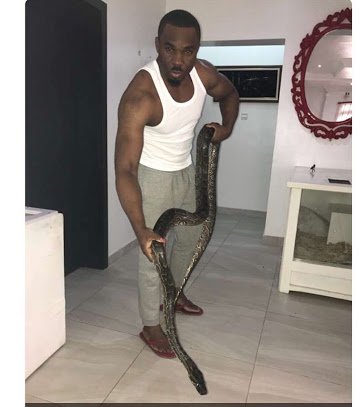 Speaking to Saturday Beats, the controversial entrepreneur said he named the python, Toke Makinwa because every ”Toke Makinwa is a huge snake”.

According to him, based on what the author writes and speaks about, she is a lady who possesses a sneaky behaviour.

”She is not your normal lady and it is time to let people know. Some people attacked me that why would I name my snake after her but the truth is that the name is patented and she does not have the right to the name.

“She is not the only Toke Makinwa in the world; there are so many of them. She might be the more popular one but right now, my pet python is even more popular than her.

“The truth is that we did not have any issue before I named the snake Toke Makinwa. She is my very good friend and I have seen her on some occasions.

“We would see ourselves and say something like, ‘Mike that was a nice one’. That is the beauty of the maturity entertainers have. We can do whatever we like in public, but behind closed doors, we know it is just for the show.

“I met her once after the news broke that I named my python Toke Makinwa and the reception I got from her was nice. She just said, ‘Hey Mike, you want them to hear our voice in Lagos State’.

” And I told her that it is what we are in the business for. I even plan to have a ‘meet, greet and take a picture with Toke’ I would take my python out and people would have the opportunity of taking a picture with her.”

Why I did not sleep as Rivers State Governor – Amaechi