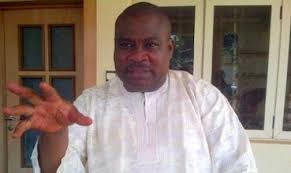 At a conference in Lagos, Aluko said he was under duress to admit to a reconciliation which was aimed at tarnishing his integrity.

He said he had gone to Eko Hotel Lagos on Sunday, April 3, to honour an invitation by the PDP leadership to address some issues affecting the state, stressing that Ekiti has been in the news for the wrong reason in recent times.

Aluko said he went to the meeting in the company of his wife and was shocked to see Governor Fayose walked into the meeting. He said he was obliged to be at the meeting because he was invited by two senior members of the party.
“I need not recall the drama and face off that ensued between me and Fayose inside the meeting. It is worthy of note that it was at this point that my wife badged into the meeting to inform me of the presence of pressmen.
“At that point I became I became enraged and decided to leave the the place but I noticed Governor Fayose rushing after me downstairs in a gestapo manner.

“My wife was already fidgeting and almost crying and suddenly I could not find her around me. I immediately realized that I need to oblige Governor Fayose’s instruction of the facing the press because of the safety of my family. “
The former PDP scribe stressed that he never refuted his earlier position and still stood by his words. “I have earlier said before before Nigerians and the whole world about the manipulation that characterized the 2014 governorship election in Ekiti State and still stand by all I said.

“You will also notice the several counter allegations by Fayose and his media team that none of them has refuted all I have said, rather the attack has been on the messenger and not the message. I will like to apologise to all Nigerians that perhaps, accepting the invitation was a tactical error.

“I will also like you to know that I am dealing with a master fraudster who is always full of mischief. You will allrecollect how he announced the purported death of Hon. AfolabiAkanni; the purported arrest of four members of the Ekiti State House of Assembly that later resurfaced.

” I need to emphasize that all that transpired at Eko Hotel on that faithful day was an organized propaganda/drama to stain my image and malign my personal integrity and I believe it would be a good script for Nollywood act,” he said.

APC leaders begged me to return to party – Osoba