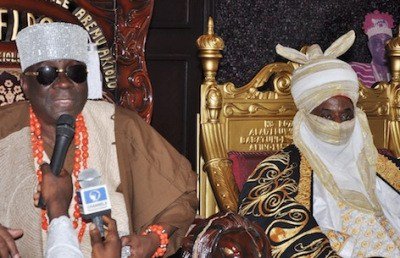 Oba of Lagos, Rilwan Akiolu on Wednesday warned the Emir of Kano, Sanusi Lamido to stop making careless statement like the one he made on herdsmen’s massacre in Benue State recently.

Sanusi had exonerated the herdsmen for killing about 70 people in Benue State, saying that: “Some months ago in Mambilla, in one weekend, over 800 Fulani were murdered by Mambilla militias. The papers did not even go there to cover the story. Most of those wiped out were women, infants and the elderly.

“In one case, a pregnant woman was killed, her stomach was ripped open and the baby was brought out and slaughtered. I personally handed over to the Federal Government a dossier with the names and pictures of the 800 or so people slaughtered as well as the names and addresses of persons known to have participated in these acts of ethnic cleansing.

“Nothing has happened. I also ensured that authorities received video and audio evidence of senior politicians in Taraba State, who were involved in this act of genocide. No one has been arrested. Fulanis were also murdered in Kajuru and Numan.

“In many of these cases it was not about conflict but militias raiding settlements to kill women and children, and then later, attacking herdsmen and slaughtering them and their cattle.”

But on Wednesday at the Lagos-Kano Economic Summit held in Epe, Lagos, where Sanusi delivered a keynote address, Akiolu said the statement made by the emir was reckless and that people should beware of their words.

“We all should watch our utterances on herdsmen attack,” he told Sanusi, but noted that the crisis was caused by failures of past administrations to address the issue.

“Majority of the herdsmen were not those we believe but all will be well with the country soon,” he said.

“This is because the revenue that will be generated from the axis is very enormous and will not be for Lagos State alone,” he said.