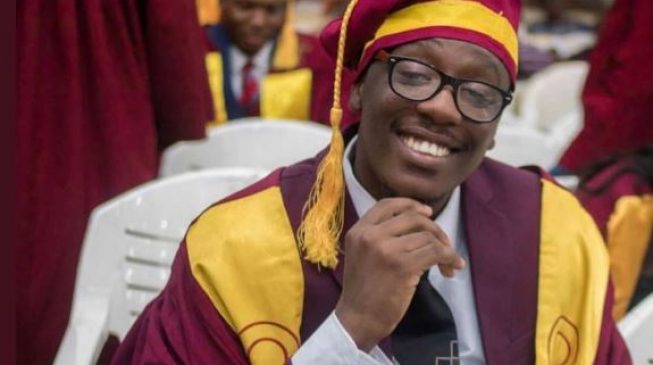 “After a journey of 7 years, I give God all the glory. Dr. Urueye Stephen (mb,bs Lagos),” this was the last post on the Facebook page of Urueye, a serving doctor at Lagos University Teaching Hospital ( LUTH), Idi-araba, Mushin, Lagos.

Urueye was said to be on his way to get food when he got stabbed in front of the hospital building on Thursday night. He died less than 48 hours after he had his convocation at the University of Lagos (UNILAG).

TheCable learnt that he was stabbed at a place called “canal” near the gate of LUTH, and according to the hospital management, he was the only son of his mother, a widow.

The school where the deceased graduated from

Following his death, medical students staged a protest on Friday morning, lamenting the high rate of insecurity in the area and calling on the school authorities to act.

DOCTORS BATTLED TO SAVE HIS LIFE

Doctors and specialist consultants were on ground to save Urueye. They did all they could to save him but it was to no avail. Urueye, gasping for breathe, struggled to the gate of the hospital before collapsing. He was seen by the security officials on duty who immediately raised the alarm.

Swiftly, he was rushed down to the accident and emergency unit of the hospital where he was resuscitated by a team of doctors and specialists. He was later transferred to the intensive care unit for further treatment but unfortunately, he died in the wee hours of Friday morning as a result of a second heart arrest.

Wasiu Adeyemo, chairman security advisory committee of the hospital, told TheCable that doctors in the hospital did their best to save Urueye.

“Doctor Stephen Urueye was injured outside the hospital environment. It was around 11pm yesterday, he was with a friend when he was attacked,” said Adeyemo who spoke on behalf of the chief medical doctor.

“She said she didn’t know he had been stabbed until she saw blood stains on him. When I got here, I saw he was being resuscitated by both senior and junior doctors. The story I heard from the friend that was with him was that he left LUTH and was going towards Ojuelegba around 9pm thereabout, before he got to Bello street, around the canal, some hoodlums came and they attacked him, collected some of the items he had with him. He was stabbed in the process.

The spot where he was stabbed

“Because where he was stabbed was not far from the school, he made an attempt to rush back to the school. He was able to get himself close to the main gate where he collapsed. The security officials saw him and they called the attention of the management, so he was rushed to the accident and emergency unit. He was already gasping when he got to the A&E and few minutes after he had an arrest.”

Adeyemo narrated how the doctors battling to save Urueye transferred him to the intensive care unit where he finally died.

“So the team of specialists on call started the resuscitation process. It was at that time that I got to the A&E. Within 25 minutes, the chief medical director got there. The pulse came back and when he was a little bit stable, we transferred him to the intensive care unit of the hospital. Within 30-40 minutes, he had another arrest. Resuscitation started again but unfortunately, he didn’t make it,” he said.

“He is in his mid-twenties. He started his housemanship last year and he just had his graduation on Wednesday. We have contacted the family, we invited them. about five of them came and told them what happened. The mum is a widow and he is the only son.”

There were reports that the deceased was killed because he confronted his attackers but a classmate of Urueye, who simply identified himself as Ebuka, told TheCable that the group operating in the area where Urueye was killed are known for harming their targets before dispossessing them of valuables.

“Urueye was close to me. He is a cool guy, I can actually vouch that he never had any argument with whoever it is that accosted him,” he said.

One of the entrances of LUTH

“I know how he came from UNIBEN, he tried to gain admission into UNIBEN before he came to UNILAG. It’s just a sad and unfortunate incident. For me, I just want to get out of here because when you look at the way he was attacked, someone that wants to go get food, and was attacked.

“We’ve had a couple of security challenges but to be fair to management, they are trying with the security inside school. They just have to do more, government needs to attend to this.”

A student who spoke under anonymity said:”People are normally attacked in that area. I’ve heard of similar thing happening to some students but none has died until now.”

“There have been stories of people being robbed in that area. The government should look into the security situation there because people have to walk at night. Some people resume duty at night while some leave during that time. So what happens if your car break down or you have to walk.”

The Lagos state police command has announced the arrest of two suspects in connection with the murder of Urueye.