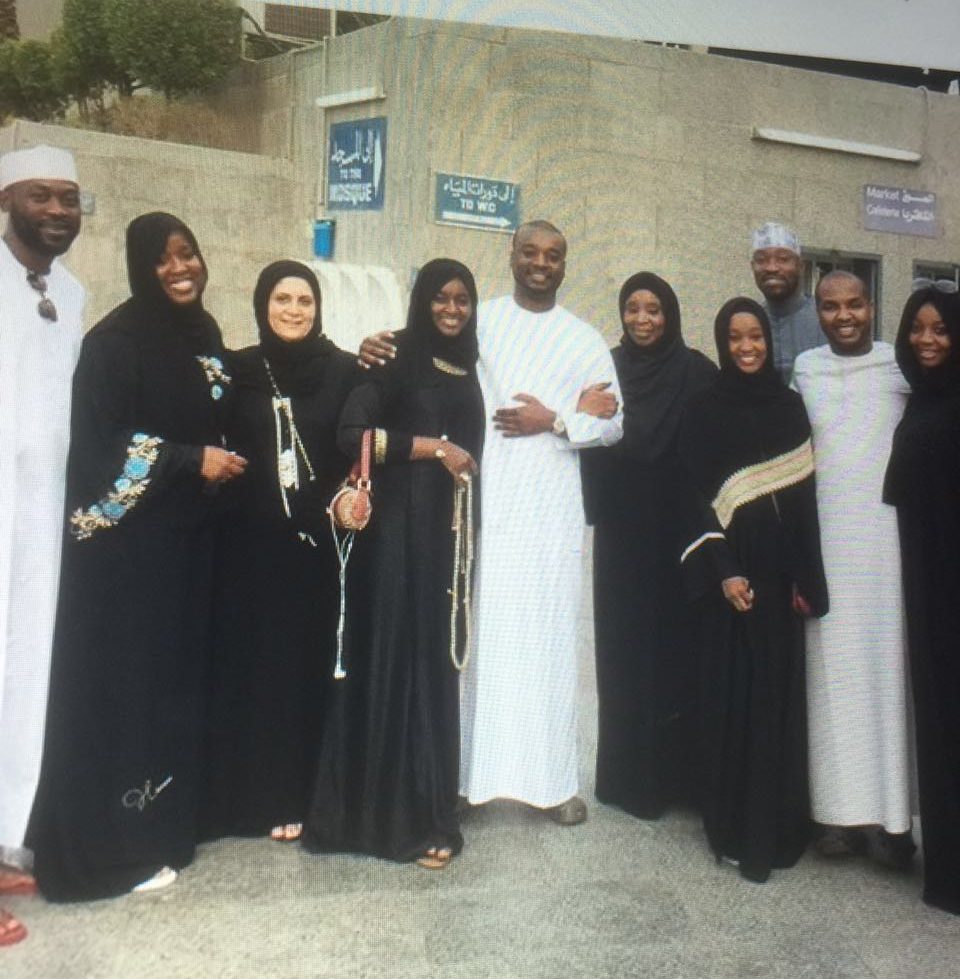 The proposed July wedding fathia between Hauwa Indimi and Mohammad Yar’adua seems to have polarized the wealthy but controversial Indimi family further with accusations of boyfriend snatching and betrayal of trust between the betrothed, Hauwa and Fatima her step sister.
If this is puzzling, then wait for the salvo being fired at Hauwa by Rahama  her step-sister and Yakaka , one of the controversial twins who is Rahama’s full blooded sister.
Zahra Indimi, nee, Buhari is also not spared in this tripartite love circle.
What exposed the deep seated animosity, hatred and rivalry within the sisters was an innocuous question posed by a popular northern based blogger, “Northern hibiscuss” on Instagram,”YOUR SISTER IS MARRYING YOUR EX AND YOU ARE YET TO MARRY. WILL YOU SUPPORT IT? 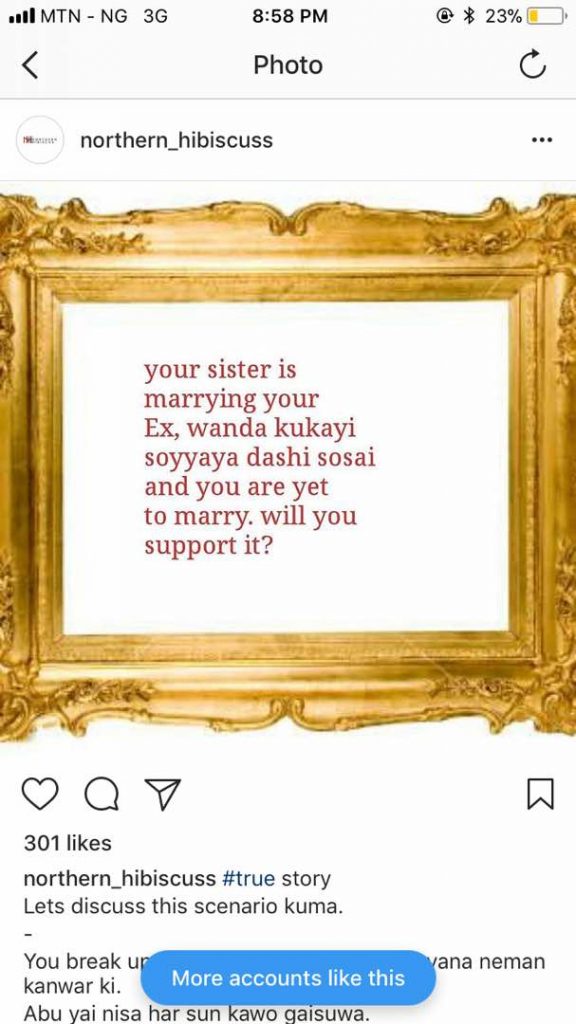 It was as if this was the necessary tonic to bring out the beasts in the sisters, they went for each others throats.
To refresh the minds of all, Mohammad was said to have been enjoying a warm romance with Fatima Indimi, who was once at the center of some nude pictures mess which shook the social media a couple of years back.
Mohammad was said to have felt terribly bad about the backlash from the scandal that he walked out of the relationship only to resurface with Zahra Buhari.
The thinking was that both had become an item and would settle down to matrimony only for Zahra Buhari to head into the home of the Indimi’s as Ahmed’s wife.
Now, the latest news is that Mohammad Yar’adua is not only engaged to Hauwa, Fatima’s ex, but they’ll be man and wife at a wedding fathia in July.
Rahama indimi, ex wife of Mohammed Babangida threw the first punch with her comments,” I USUALLY MIND MY BUSINESS AND DON’T COMMENT, THIS IS SO F—-K, HE’S AN EX FOR A REASON AND NOW YOU WILL GO AND BRING THE F——K BACK TO MY LIFE.NAHHHH.I WON’T SUPPORT IT.
THERE’S A CODE FOR THIS.FRIENDS AND FAMILY EX’S SHOULD BE OFF THE TABLE.
MY OPINION SHA.. 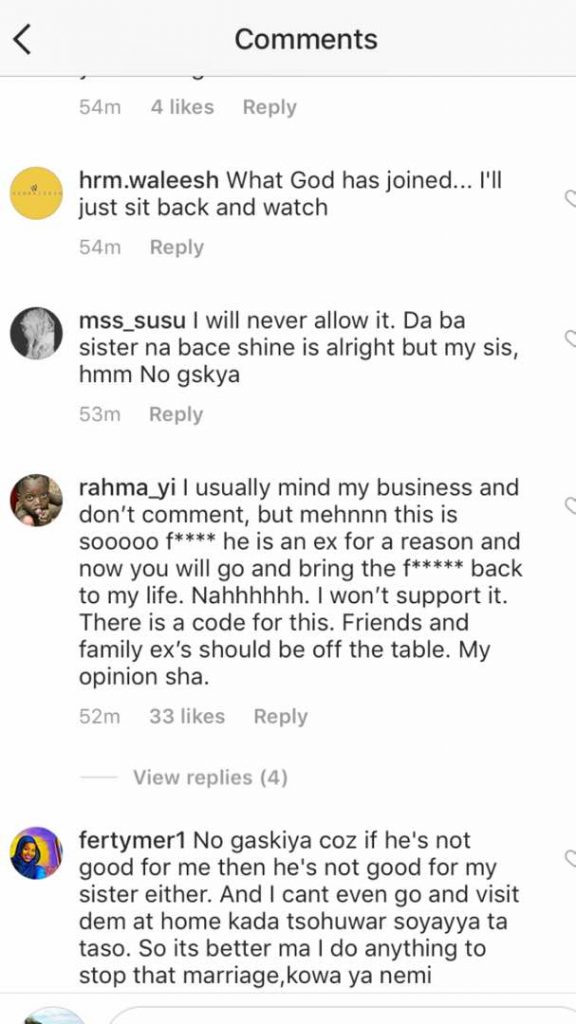 Hauwa got the message and wasted no time in hurling her own missiles.
UNDERSTAND THAT HE IS NOT INTO ANYONE, WHY CAN’T YOU JUST MIND YOUR BUSINESS. SEE U, HOW OLD ARE YOU, SHE IS YOUR SMALL SISTER.YOU’RE SUPPOSE TO BE LOVING BUT NO, YOUR HALI IS JUST AS BLACK AS YOUR FACE. JUST LET HER BE.IF YOU CAN’T BE HAPPY FOR HER THEN JUST LET HER BE HAPPY. 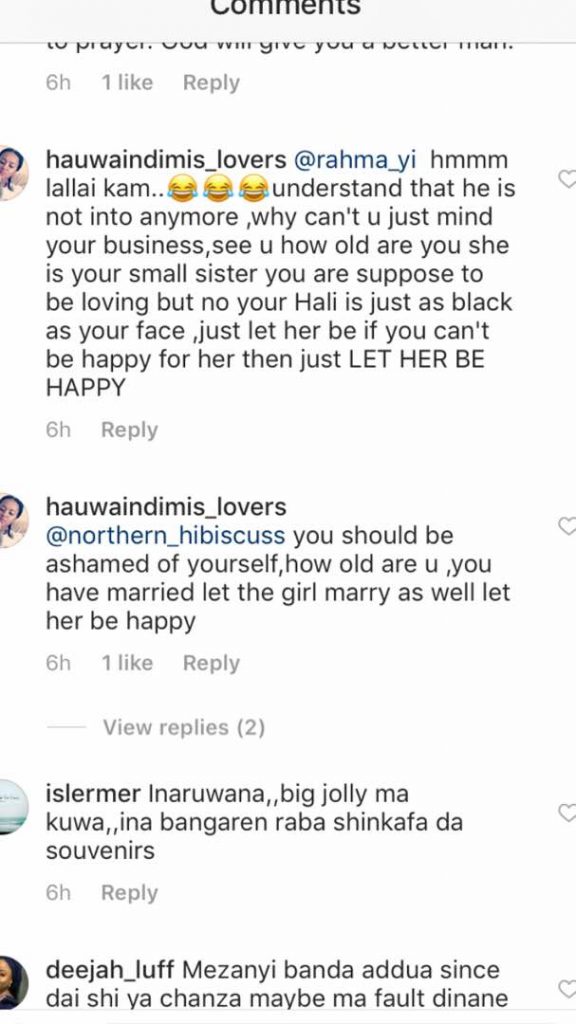 As soon as this landed, Rahama’s ever reliable soul  sister, Zahra Yakaka, wife of a malian fruit seller,appeared on the scene with her own missile, IF MY SISTER IS MARRYING MY EX SHE WAS NEVER MY SISTER IN THE FIRST PLACE. 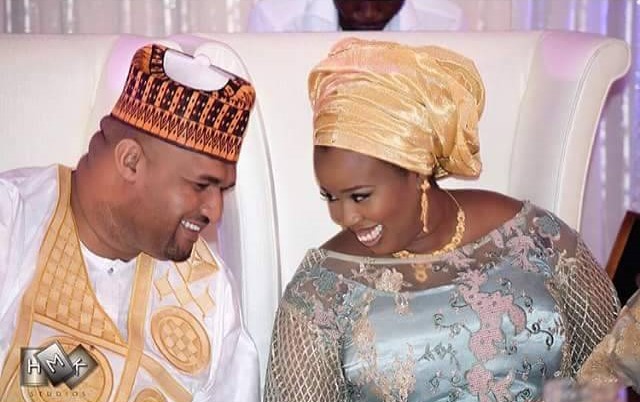 She signed this under her handle,tulip_bistro.
The question now is who will bell the cat and call these girls to order for the sake of the family. 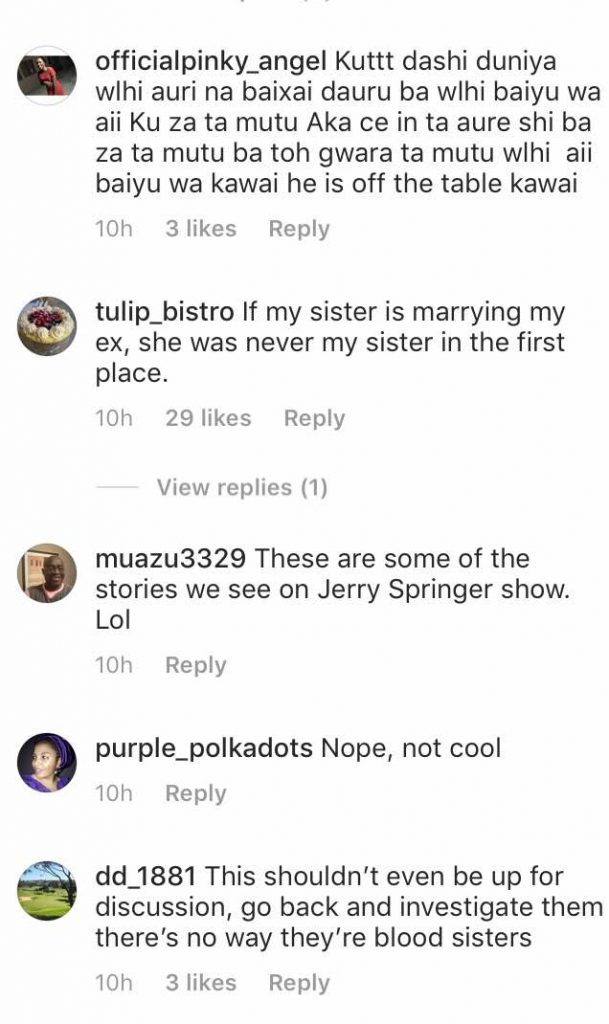