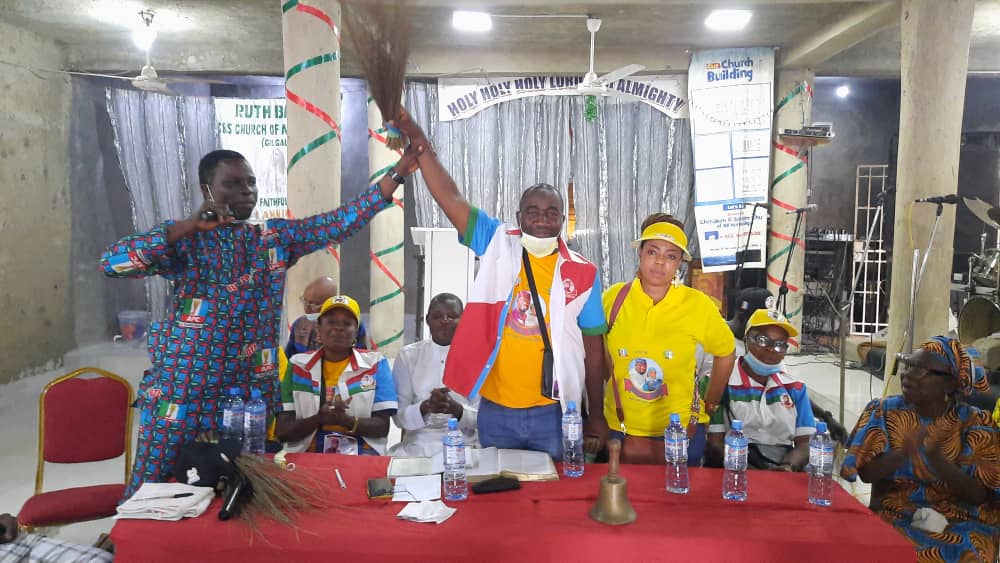 The Chairmanship Candidate of the APC in Ifako-Ijaiye, Prince Usman Akanbi Hamzat (UAH) led the Vice Chairmanship and Councillorship Candidates to seek prayers and blessings from main Religious Leaders and traditional Chieftains in the Local Government, as the party flagged off its campaign yesterday for the council election coming up on Saturday, July 24, 2021 in Lagos State.

The team visited the Christian Association of Nigeria (CAN), Ifako-Ijaiye Muslim Community, the Olu of Iju-Ishaga and the Council of Baales in Ifako-Ijaiye, respectively.

The UAH Campaign train also moved across major areas in Ifako-Ijaiye and canvassed for votes from the electorates ahead of July 24 Local Government polls.

APC chairman, Ifako-Ijaiye LG, Deacon Banjo Omole, as he presented Chairmanship candidate, Usman Akanbi Hamzat (hand raised), with his wife standing by him during their campaign tour to locations in the local government area yesterday.

The main religious institutions in the local government (CAN and the Muslim Community), yesterday, gave their blessings and full support to the chairmanship candidacy of Prince Usman Akanbi Hamzat (UAH), his running mate, Mrs. Oluwatoyin Awoniyi Akerele and other councillorship candidates of the party when the candidates visited their Secretariat with lots of party supporters, Leaders and other well-wishers.

At another gathering, all the Baales in Ifako-Ijaiye converged at NRC Building in Iju, to bless the APC Candidates. They also. Confirmed their readiness to mobilize support for APC Candidates’ victory in the forthcoming Local Government Elections scheduled for 24th July.