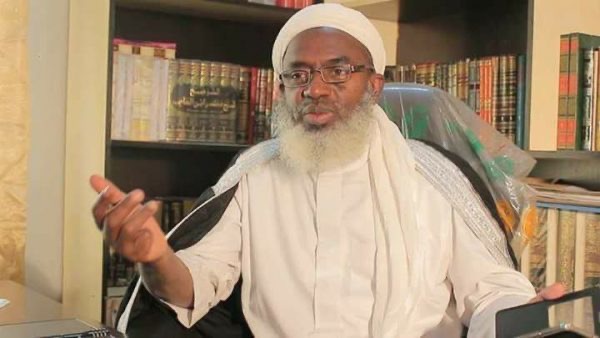 The widely disseminated statement by Kaduna-based Muslim cleric Dr Ahmed Gumi titled “War has never been a solution anywhere anytime” is too sweeping to be true. He was referring to the Nigerian Army’s recently stepped-up campaign against bandits in Zamfara and other north-western states, which he says will not end banditry. He said only negotiation and a peaceful settlement with the bandit leaders will do.

For starters, it is not true that war has never resolved any issues. It may not be ideal but throughout human history, nothing resolves contentious issues quite as conclusively as a victory on the battlefield.

The early Muslim community in Medina managed to survive and ultimately triumph over their Meccan enemies because of a string of military victories at Badr, Uhud, Khandaq and conquest of Mecca in 629AD. More recently, Napoleon Bonaparte’s Grand Armee was only stopped from total conquest of Europe by military defeats in Russia in 1812 and at Waterloo in 1815.

Ten years ago I attended a meeting in Abuja where colleagues who were urging the Jonathan Administration to negotiate with Boko Haram claimed that every war in world history ended up at the negotiating table. I raised my hand and said that was not true. World War Two, the costliest war in human history, ended in 1945 when the Axis Powers accepted the Allied Powers’ demand for “unconditional surrender.” The famous picture of American 5-star General Douglas MacArthur facing Japanese commanders aboard the USS Missouri in August 1945 was not negotiation; it was to accept their surrender.

Nigerian civil war did not end through negotiation. Commander of 3 Marine Commando Col. Olusegun Obasanjo had accepted Biafra’s “field surrender.” He then took Biafran Chief of General Staff Phillip Effiong to Lagos to see General Gowon, where he read a speech and declared, “Republic of Biafra ceases to exist.”

Not only us. American civil war ended in 1865 not with peace talks but when Confederate General-in-Chief Robert E. Lee surrendered to Commanding General of the Union Army Ulysses Grant at Appomattox. Same way, the Chinese civil war of the 1930s-40s ended when Mao Zedong and the Communists rode into Beijing in 1949 and declared the Peoples Republic, while Marshal Chiang Kai-shek and his Kuomintang fled to Taiwan.

A little further back, Sokoto Jihad wars of 1804-08 were resolved on the battlefield. Danfodio did not sign any treaty with Sarkin Gobir because Jihad forces sacked Alkalawa and the kingdom fell. So did all other kingdoms in Hausaland. The vicious Kano civil war of 1893-4, Yakin Basasa, ended when the Yusufawa completely routed Sarki Tukur’s forces, pursued him to Katsina and killed him. In 1903 when British forces captured Sokoto, Lord Lugard read a proclamation to the blind Waziri that “the Fulani in old times under Danfodio conquered this country. It has now passed to the British throne by conquest.” [Never mind the historical inaccuracy]. Don’t be fooled by their modern-day posturing; the Brits didn’t negotiate with us.

When rebels take up arms against the reigning authority, they should better ensure that they have sufficient force to defeat it, or else they will bear the terrible consequences. As Sri Lanka’s Tamil Tigers, Colombia’s FARC rebels, Uganda’s Lord’s Resistance Army, Sierra Leone’s RUF, Mozambique’s Renamo, Russia’s Chechen rebels, Spain’s ETA, France’s Corsican separatists, Italy’s Red Brigades, Germany’s Baeder-Meinhof and Japanese Red Army all found out. Right now, Syria’s ten-year civil war is winding down, without any peace treaty because President Bashar al-Assad, with Russian, Iranian and Hitzbullah help, has defeated the rebels that took up arms against him.

It is a different matter if rebels manage to chase out the government, such as when rebels killed Muammar Gaddafi in Libya, Ethiopian rebels that chased out Mengistu Haile Mariam in 1991, Somali clan lords that drove away President Siad Barre in 1991 or more recently, the Taliban that drove the US Army out of Afghanistan. A military coup, such as the recent one in Guinea, falls into the same bracket. When Egypt’s General Abdulfatah al-Sisi sacked Muslim Brotherhood’s elected president Mohammed Morsi, jailed him and crushed the brotherhood, there was no need for negotiations.

Sheikh Gumi’s insistence that government must negotiate with the northwestern bandits is unreasonable and impractical. To begin with, the bandits have no political agenda. All they have are a litany of excuses, that they have been marginalised in Nigeria, so they resorted to crime. They are very much like the Janjaweed that terrorised eastern Sudan 15 years ago, ronin of 19th century Japan, or India’s notorious “Bandit Queen” Phoolan Devi.

If it is a matter of redirecting national resources to them in order to ameliorate their community’s marginalization, I have news for the Sheikh. In 1992 when the IBB regime made many concessions and signed a comprehensive agreement with ASUU in order to end its crippling strike, newly-arrived Education Minister and top constitutional lawyer Prof Ben Nwabueze promptly repudiated the agreement in January 1993. He said it was a “valid but not binding” pact for government to negotiate away its sovereign right to allocate resources based on an agreement with a section of its citizens. So, any deal with bandits to channel resources to them is valid but not binding, according to Nwabueze.

In any case, unlike Boko Haram, the bandits have no centralized leadership that government can negotiate with. In the recently unveiled book “I am a bandit” by Danfodio University, Sokoto historian Dr Murtala Ahmed Rufa’i identified 26 bandit groups in Zamfara’s Maradun Local Government alone. Truly, unlike Boko Haram, bandits are not trying to take over the government and run Nigeria. Their aim is to establish several hundred lawless fiefdoms all across the region where they can kill, rape and pillage at will. That is worse than Boko Haram if you ask me.

Please don’t mistake me for a warmonger. Since 1991, I have aligned myself with a statement that the late Talban Bauchi Dr Ibrahim Tahir made before a judicial commission of inquiry on the Tafawa Balewa crises. He said whatever your grievances are, it is insurrectionary to attack a police station even with stones, and the government is entitled to respond with all the force it can muster.

Americans make a distinction between a “good” war and a “bad” war. They say World War Two and the invasion of Afghanistan are good wars while Vietnam and Iraq are bad wars. In other words, if a war is forced upon you and you have no choice but to defend yourself, that is a good war. Attacking other people in the name of imperial conquest, “anti-communism” or false claim that they have WMDs is a bad war. Both Boko Haram and bandits attacked the Nigerian state and its people. Fighting them off with all the force the Nigerian military and security forces can muster is therefore a good war.

This is not a war of choice. It was forced on us. If Nigerian Army, after many stumbles, has now assembled enough force to destroy the bandits, by all means, we should support them. We should only remind the Army to minimise collateral damage, respect the human rights of even the bandits, and make the operation snappy because the closure of markets, petrol stations and GSM service is very costly for the civilian population. We pray for the soldiers’ quick victory and their safety.