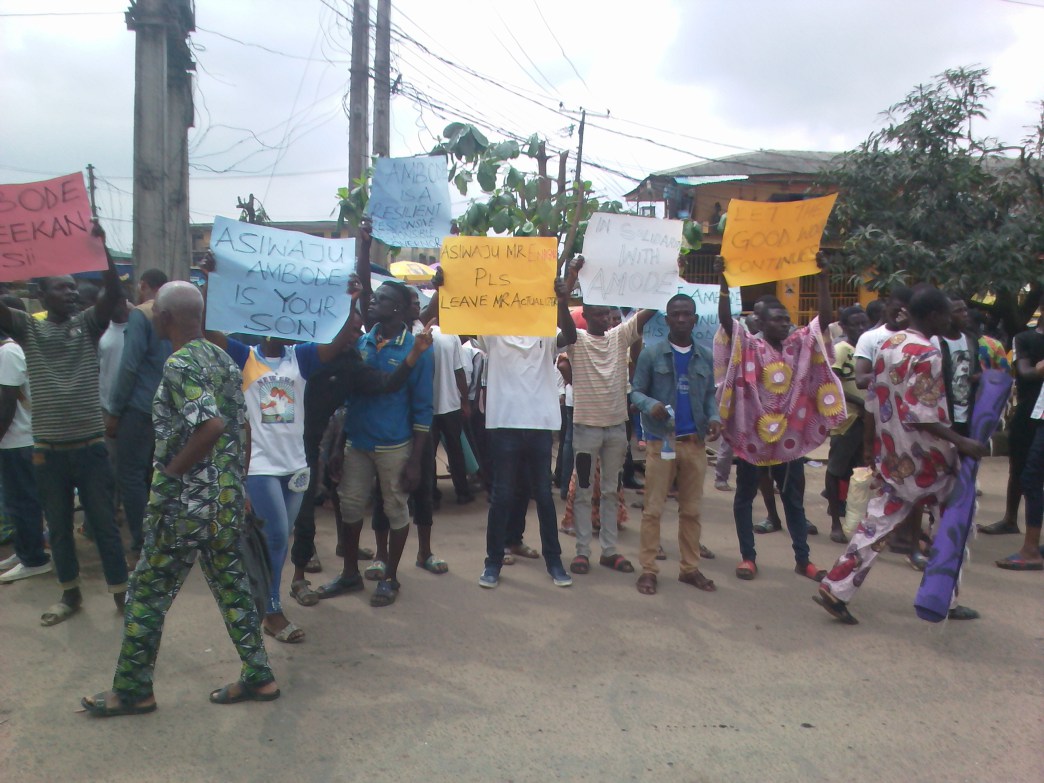 The rallies are coming against the backdrop of speculations that Ambode has fallen out of favour with his political godfather, Bola Tinubu.

Mr Tinubu is said to be currently rooting for a former commissioner in the state, Jide Sanwo-Olu, who has already declared his intention to contest the governorship on the platform of the APC party, where Mr Ambode also belongs.

Analysts view the development as a trying political season for Mr Ambode, who has since announced his desire to seek re-election.

Mr Tinubu, a former Lagos Governor and Senator, has dominated the politics of Lagos State, Nigeria’s economic capital for many years.

Members of the HACRAC group chanted solidarity songs as they moved from one place to another in the city, clutching placards with various inscriptions.

The placards read: “Let the good man continue. Asiwaju, Ambode is your son. In solidarity with Ambode. Ambode is a resilient responsible governor.

On September 14, a group, called `Ambodemania Movement/Support Worldwide’, staged a similar rally in Lagos to celebrate what they called “good governance in Lagos’’.

One of the leaders of the rally, Alex Omotehinse, told reporters that the rallies were holding simultaneously at Ogba, Iyana-Ipaja, Berger and other areas to drum support for Mr Ambode.

He said the action was aimed at supporting “the good governance and sterling performance of the governor since his assumption of office.

“We are in support that Ambode should be returned as the next governor of Lagos State. The rally is because of insinuations that there is going to be an imposition because of god-fatherism.

“Nigerians and Lagosians believe that the man has tried. Nobody is perfect. Some of us believe that Ambode has tried his best and that no one knows it all. We believe he deserves another term.

“He should be given an opportunity to complete what he has started,” Mr Omotehinse, the Lagos State Chairman of the Committee for the Defence of Human Rights said.

According to him, if a new governor is elected, it will slow down the pace of development as such governor will start afresh, learn and come up with new policies.

“It is a must for Ambode to return. Let us applaud his sterling performances and good will from the masses and encourage him to continue. Ambode is tested okay. We know what he can offer.”

Also speaking to NAN, an activist, Funmi Ajayi, said if Mr Ambode’s re-election was what Lagosians wanted, the leadership of APC should field Mr Ambode for a second term.

“The people of Lagos State are saying they have enjoyed the work that he has done, so they want him to continue.

“People are pleading with Asiwaju Bola Tinubu on behalf of Ambode to grant him the second term to continue his infrastructural development. Kudos to Gov. Ambode, he is working,” Ms Ajayi said.

Beyond the Illegal Search of Chief Edwin Clark’s House, By Femi Falana