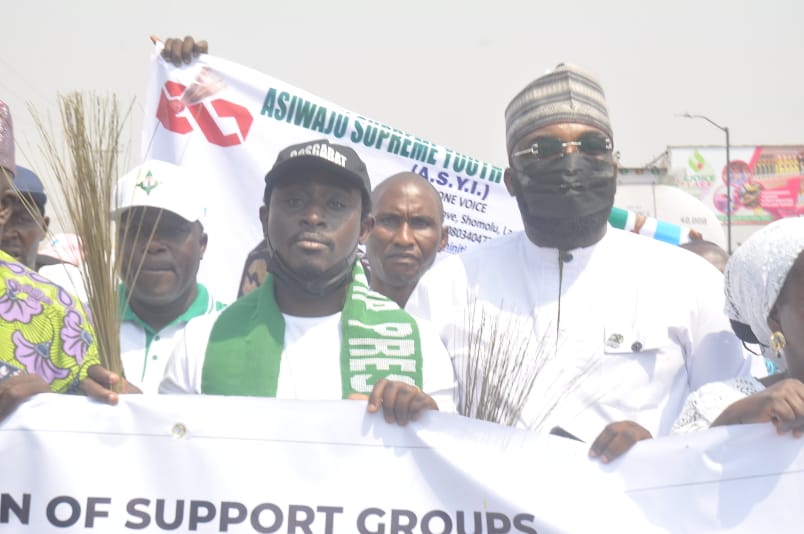 Ahead of the 2023 general elections, Coalition of Support Groups for Asiwaju Bola Ahmed Tinubu on Wednesday staged a one million man solidarity walk in Ibadan, Oyo State to declare their support for his presidential ambition.

No fewer than 57 various groups, including BAT, SABAT, ALAKA, TMT, ABAT and others came from Lagos, Zamfara, Nassarawa, Niger, Oyo States amongst others to participate in the rally, which held at the Obafemi Awolowo (former Liberty) Stadium, Oke Ado, Ibadan.

Speaking with First Weekly Magazine, the Director-General of the coalition, Mr. Babajide Akin Thomas said that the motive behind the rally was to tell Nigerians that it is the turn of the South West to produce the next President of Nigeria and that only Asiwaju Bola Ahmed Tinubu of the All Progressives Congress ((APC) is it to occupy the position from the zone.

Akin Thomas attributed this toTinubu’s virtues of good leadership and that he is a grassroots mobiliser, who has paid his dues in serving others, hence, he should also be given a chance to lead the nation.

According to him, “we are staging this rally for Asiwaju Bola Ahmed Tinubu to tell Nigerians that he is the person that we want in Aso Rock in 2023. All the 57 support groups and their executives declared their support for Bola Amed Tinubu’s candidacy.

“Tinubu signifies boldness, excellent leadership and a man every Nigerian is familiar with.

“He is trustworthy, he is a man that has done something similar to this before and he will replicate it in Nigeria if given the opportunity.

“Remember that he changed Lagos State dramatically, when he was the governor of the state for eight years

“Since then, he has been bringing people that have the experience, people that know what they would do to govern Lagos State and the state has been working.

“We therefore want Nigeria to work the way Lagos is working. So, all the people here today are saying that they want Asiwaju Bola Ahmed Tinubu in Aso Rock in 2023 and that Nigeria will work through him,” he said.

Speaking in the same vein, the Oyo State Coordinator of the group, Hon. Olusola Ajibade said that the group has 100% assurance that Asiwaju Bola Tinubu will clinch the APC ticket and become Nigeria’s President in 2023.

“We lost the opportunity of having the late Chief Obafemi Awolowo and Chief MKO Abiola as Nigerian president in 1963, 1983 and 1993 respectively.

“They tried their best, but it was Yoruba people that worked against them.

“30 years after MKO Abiola’s election was annuled, God is giving us another opportunity, let us make good use of it in the interest of our nation and all of us.

“Our enemies have started again by pushing someone else against Asiwaju Bola Tinubu and this man was brought to the limelight by this same Tinubu.

“In politics there are leaders and Asiwaju Tinubu is our leader. It is not the turn of Nigeria’s Vice President, Professor Yemi Osinbajo to be president,

“Even if Osinbajo has the backing of the Presidency or the USA he won’t get there because Tinubu was the brain behind how President Muhammadu Buhari got there having failed in his three previous attempts.

“For Buhari to get it the fourth time, he had to weep, not minding the fact that it is not good for a military officer to weep, especially in public and this was what caught the attention of Bola Tinubu to form an alliance with other political parties that came together to form the APC,” he
said.