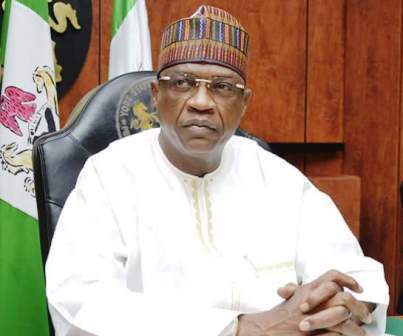 Governor Ibrahim Gaidam of Yobe State is in hot soup. Some aggrieved residents of Dapchi, headquarters of Busari Local Government Area of Yobe State, attacked the governor over the attack on Government Girls Science Technical College, Dapchi, Yobe, by Boko Haram where about 100 girls were taken away by Boko Haram fighters.

Two of the vehicles in the convoy of governor were damaged. They not only booed the number one citizen of the state but threw stones and dangerous objects at his convoy, resulting in the destruction of some vehicles.

The governor, had disclosed during a visit that contrary to earlier reports, none of the missing girls had been rescued. The governor told weeping family members of the students to keep praying that the girls be found.

Governor Geidam’s statement came barely twenty-fours after the state government in a statement signed by Director of Information, Abdullahi Bego, said the girls had been rescued by the military. He urged the parents to remain faithful, adding that security operatives were still searching for the girls.

“Soldiers have been pursuing the insurgents, although they received information that the Boko Haram insurgents had passed some areas, but the communities in the areas said they did not spot the girls along with the insurgents.”

He assured that government and security operatives would not rest on their oars until the missing girls were accounted for. The waiting parents wept profusely as the earlier news that the girls were rescued turned out to be false. Angry residents stone Yobe

Sources said… “When Gaidam began speaking, we were calm. We followed all that he said with assurances that the situation was under control. But we got suspicious when he began dribbling us. You know how these politicians are. He said we should cooperate with the government that they were doing their best. We asked him about the situation and he said none of the students had been rescued.”

“At that point, some parents broke down in tears, some even collapsed and before you knew it, the atmosphere was chaotic. The governor had to be ferried away by his security operatives but the mob went after the vehicles in his convoy.  The peace that we have been enjoying in this community was disrupted.”

“It took the intervention of soldiers, who fired shots into the air, for the crowd to disperse. He said moments after the troops left, some residents gathered again but this time around they started protesting. They blocked major roads, chanting anti-government songs and placing curses on Boko Haram.”

“They demanded the immediate release of the students and said they were not interested in how government would achieve that.

How woman forged AIG’s letter to get 33,000 litres of fuel