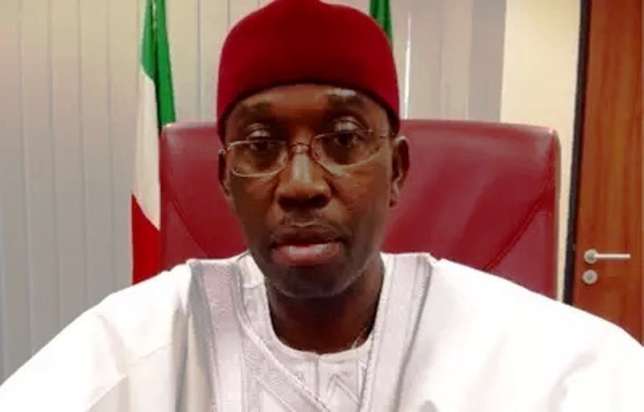 A group under the auspices of Isoko Monitoring Group,IMG has said that Sen.(Dr.) Arthur Ifeanyi Okowa-led Delta State Government has betrayed the trust of the Isoko people that voted massively in its favour in the 2015 general elections.

The group made the assertion during a crucial meeting which held in Warri, Delta State.

The group also stated that the State government failed in its constitutional responsibility to make adequate, equitable and respectable provisions to carter for the developmental needs and welfare of the Isoko ethnic group in its 2018 budget.

The President of the group, Comrade Sebastine Agbefe described the Commissioner for Budget and Economic Planning, Mr. Kingsley Emu’s comment on behalf of the Delta State Government as, “The most unfortunate and the highest of insult on the good people of Isoko nation.”

Agbefe said, “though the totality and content thereof reveals a peacock-like impudence and cat-like carelessness, we will not deviate from our time honoured values and go so low as to respond to Emu in his trademark tone and language.

“We remain focused on the issue and want to state emphatically that the projects in Isoko that have received paltry sums in the 2018 budget, an example of which is the Erowha Road which the government voted 49 million Naira for, are projects which Dr. Okowa and the PDP during campaigns promised to deliver to the Isoko people. Voting a mere 49 million Naira for such a massive flagship project while billions are voted for ordinary walkways and streets in other areas of the State is a total betrayal of trust and smacks of insincerity on the part of the government.

“Additionally, The stake of Isoko in DESOPADEC is as a result of the environmental degradation associated with Oil and Gas exploration which the Isoko areas have suffered since 1958, when oil was discovered in Uzere.

”This, which is largely insignificant and not commensurate with what is frittered away from our land, is provided for by law as a way to give back to the environment and the people what is taken away and it is not a privilege. We find it troubling that Mr. Emu will seek to justify the failure of his office in relation to the 2018 budget by suggesting that Isoko areas are taken care of by DESOPADEC. This is a deeply seated misplaced grudge that does not address the failure of the State government on the path of the Isoko people.

“We believe that the reference to the omnibus heads to explain away the obvious lack of the budgetary provisions for Isoko areas is an afterthought, which the Delta State government wishes to employ to correct the anomaly. However, such measures cannot address the imbalance which is a total disrespect for our people and a total disregard to our democratic stake in Delta State.

“Hence, we want to reiterate that except the government of Dr. Ifeanyi Okowa give the Isoko people a fair deal in its 2018 fiscal year and address the continuous marginalization of the Isoko people, the “Vote Of No Confidence” passed on Dr. Ifeanyi Okowa and its administration by the Isoko Monitoring Group stands. Dr. Okowa can be rest assured that the Isoko people will massively vote against him in 2019 because we can not entrust our future into his hands anymore while this outright betrayal and political negligence persists.”

PDP not known to have succeeded in anything – Aregbesola