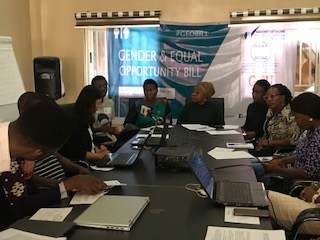 The National Coalition on Affirmative Action and the Vaccine Network for Disease Control have called on the National Assembly to conduct a public hearing on the Gender and Equal Opportunity Bill for its eventual ratification.

The bill, which was first dismissed in March 2016, has since passed the second hearing at the Senate.

It seeks to guarantee the rights of women to equal opportunities in employment; equal rights to inheritance for both male and female children; equal rights for women in marriage and divorce, equal access to education, property/land ownership and inheritance; protects the rights of widows; guarantee appropriate measures against gender discrimination in political and public life and ensure the prohibition of violence towards women.

The Chief Oversight Officer for Vaccine Network for Disease Control, Chika Offor, said it is pertinent for the bill to go to public hearing before the end of the present assembly.

She said the bill has gone through a lot of processes already, including the second reading in the Senate and it is time for a public hearing on it.

Mrs Offor said failure to do this before the end of the Eighth Assembly will be a huge step backward for the bill.

She said the bill which was first presented in 2010 was thrown out due to some religious views and other issues.

Mrs Offor noted that Nigeria loses 145 women of childbearing age, making it the second largest contributor to maternal mortality rate in the world because women do not have the right to determine when they want to give birth.

She said the bill will give women, including those in the rural areas, the opportunity to take certain decisions on their own.

She urged the legislators to ensure the bill goes to a public hearing to enable its passage in the nearest future.

The Coordinator, Gender Technical Unit National Assembly, Eqy Anazonwu, said the time that elapsed since the second hearing is enough to have passed the bill.

She said the passage of the bill will work in line in ensuring the Sustainable Development Goal 5 is achieved.

The SDG 5 seeks to eliminate all forms of discrimination against women and girls.

The Executive Director, Initiative for Girls, Abiodun Eshiet, urged the media to be at the forefront of this advocacy towards the ramification of the GEO bill.

She said engaging policymakers at this critical time of electoral campaigns will go a long way to determine the fate of the bill.

ASUU Strike: Lecturers walk out of meeting with govt delegation