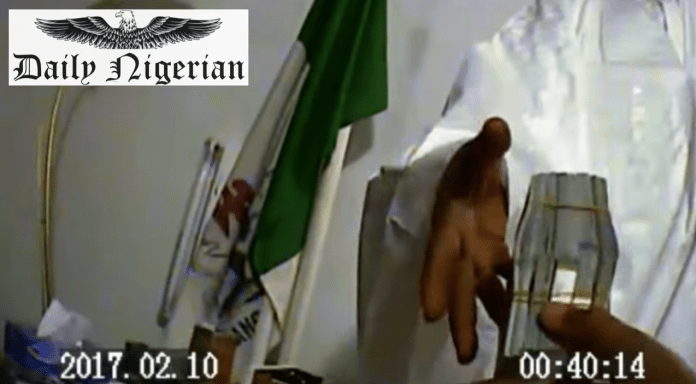 Governor Abdullahi Ganduje of Kano has sued Daily Nigerian newspaper and its Publisher, Jaafar Jaafar over video clips published by the online medium showing the governor collecting bribe in hard currency from contractors.

Daily Nigerian reports that the suit, filed at a state High Court, is coming one month after publishing the bribe-taking video story.

In the suit filed by Mr Ganduje’s counsel, Nuraddeen Ayagi, the governor is seeking the court to, among others, restrain Daily Nigerian from further publishing what he called “defamatory doctored video clips.”

The governor also wants the court to order Daily Nigerian to pay the sum of N3 billion as damages for the defamation of his character.

Mr Ganduje further asked the court to order Daily Nigerian to write and publish a public apology and syndicate same through other online platforms with global accessibility.

The governor has appeared in several video clips receiving bribe, amounting to about $5million from contractors in the state.

Multiple contractors who spoke on the condition of anonymity said the governor personally receives from 15 to 25 percent kickbacks for every project executed in the state.

The sting operation to capture the governor on camera began two years ago when one of the contractors agreed with Daily Nigerian’s request to plant spy camera on his kaftan lapel while offering the bribe.

During about 10 months efforts to capture the bribe giving/taking scenes, the governor’s face and body were clearly captured in nine clips, while six others did not clearly reveal the governor’s face. About $5m dollars were delivered to the governor during the sting operation.

When contacted over the development, Mr Jaafar said his lawyers would study the process and respond appropriately after he and the company are duly served.

EFCC ‘seizes’ over 20 houses from Diezani, five from Fayose, Dasuki