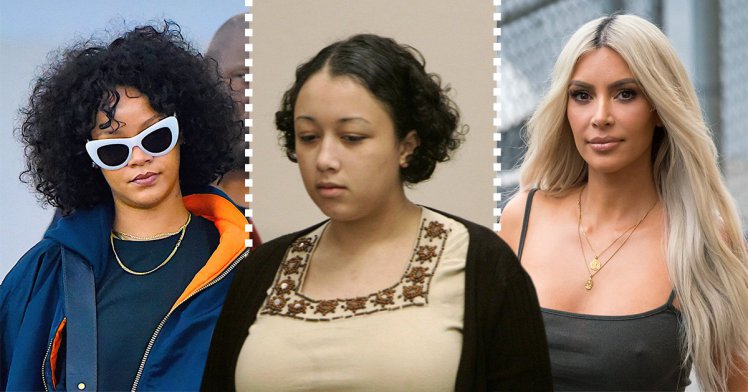 Celebrities including Kim Kardashian and Rihanna have called for the release of a woman who was sentenced to life in prison when she was 16 for killing a man who hired her for sex.

Cyntoia Brown, now 29, was just 16 years old when she shot and killed Johnny Mitchell Allen, 43, who hired her to have sex.

In court, the Tennessee teenager claimed that Brown had showed her guns before sex, and she believed he was reaching underneath his bed for a gun so she shot him with a .40 caliber handgun she had in her bag.

A jury rejected Brown’s plea of self-defense and found her guilty of first-degree murder, premeditated murder, first-degree felony murder and aggravated robbery – for which she was sentenced to life in prison at Tennessee Prison for Women.

However, the decision was highly controversial due to Cyntoia being underage when she was trafficked into the sex work industry, leading to years of sexual abuse.

She, her mother and her grandmother had all been raped, and she was encouraged to be a ‘good whore’ by a 24-year-old man named Cutthroat that she moved in with.

A film was made by filmaker Dan Birman in 2011 called Me Facing Life: Cyntoia’s Story, detailing the case, and a video of it on Fox News this month was brought to the attention of social media – with many celebrities picking up on Cyntoia’s story.

A screengrab of a teenage Cyntoia in a prison jumpsuit in court began circulating on social media, with the passage: ‘Imagine at the age of 16 being sex-trafficked by a pimp named “Cut-throat”. After days of being repeatedly drugged and raped by different men you were purchased by a 43-year-old predator who took you to his home to use you for sex. You end up finding enough courage to fight back and shoot and kill him.

‘You’re arrested as result tried and convicted as an adult and sentenced to life in prison.

‘This is the story of Cyntoia Brown. She will be eligible for parole when she is 69 years old.’

Kim Kardashian shared the post on Twitter and even claimed she was contacting her own legal team to see what could be done.

She wrote: ‘The system has failed. It’s heart breaking to see a young girl sex trafficked then when she has the courage to fight back is jailed for life! We have to do better & do what’s right. I’ve called my attorneys yesterday to see what can be done to fix this. #FreeCyntoiaBrown.’

Rihanna shared the post on Instagram and wrote: ‘did we somehow change the definition of #JUSTICE along the way?? cause….. Something is horribly wrong when the system enables these rapists and the victim is thrown away for life! To each of you responsible for this child’s sentence I hope to God you don’t have children, because this could be your daughter being punished for punishing already!

Snoop Dogg compared Cyntoia’s case to that of Brock Turner who was sentenced to six months in prison for felony sexual assault.

Sherlock star Amanda Abbington tweeted: ‘So this needs to be addressed and rectified. This is a huge miscarriage of justice. Spread the word. It’s too dreadful’; while Modern Family star Ariel Winter wrote: ‘I am saddened and disgusted by our system. After all she endured she is now imprisoned for life? For finally having the courage to fight back?’