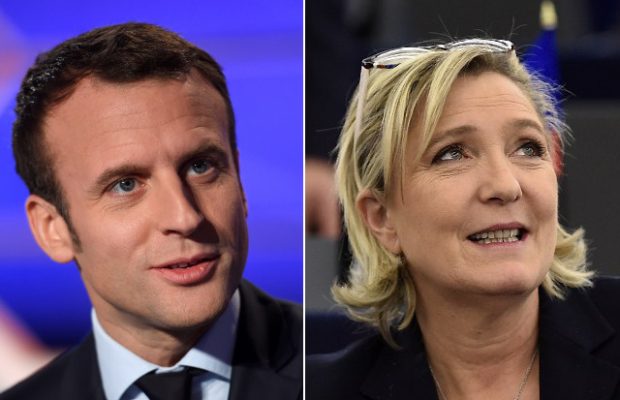 Centrist Emmanuel Macron has gone through to the second round of the French election and will face far-right leader Marine Le Pen on May 7.

Mr Macron, a former banker, is seen as a political newcomer and ran without the backing of an established party.

He topped Sunday’s vote and is favourite to win the main election.

It is the first time in six decades that neither of France’s main left-wing or right-wing parties has had a candidate in the second round.

Other challengers, centre-right François Fillon and hard-left Jean-Luc Mélenchon, fell behind with just over 19% each.

At 39, Mr Macron could become the youngest president France has ever had.

He secured 8.4 million votes – more than any other candidate – in the first round.

In a victory speech to supporters, Macron said: “I hope that in a fortnight I will become your president. I want to become the president of all the people of France – the president of the patriots in the face of the threat from the nationalists,” he said.

For Ms Le Pen, she took over the FN leadership from her father in January 2011 and helped her party secure big gains in regional elections.

She won 7.6 million votes on Sunday – the strongest ever result for a FN candidate.
?
Following the first round results, Ms Le Pen made an “appeal to all patriots”, saying a vote for her was the key to the “survival of France”.
?
“Wherever they come from, whatever their origin, whatever they voted for in the first round, I invite them all to join us and to abandon ancient quarrels and to concentrate on what is essential for our country,” she said.

Brave schoolgirl, 10, who fought off a 9ft alligator with her bare hands reveals she stuck her fingers up its NOSE to stop it eating her