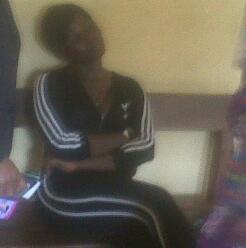 A 33-year old single lady, Morenikeji Oke has been arrested for allegedly battering a housewife, Abiola Akubor after she had warned her to forget her husband because he belonged to her.

The incident happened at Muyili Ashode Street in the Pipeline area of Ejigbo, Lagos where Oke resided and ran a drinking joint.

Mrs. Akubor had insisted on having her husband, Sadiq back as she had two children for him. She reportedly went to Oke’s house in search of Sadiq around 10pm in the night but met the shock of her life. She was brutally attacked and injured on her left eye. Even her sister who followed her to Oke’s house was not spared.

P.M.EXPRESS scooped that Akubor and her husband, Sadiq had been living together peacefully and had children until he met the single lady, Oke. His behaviours changed thereafter and he shifted focus to Oke. He was said to have been spending his time and money on Oke which his wife attempted to stop but was brutally attacked by the suspect.

The assault was reported to the police at Ejigbo Division, Oke was arrested and charged before the court for the alleged assault.

She pleaded not guilty.

The counsel to Oke, Barrister Chris Osemezie informed the court that the matter was a case of affray because the two women were fighting over a man and both of them were supposed to be charged before the court.

However, the Presiding Magistrate, Mr. F.K.J. Layeni noted that the matter before the court was a case of assault and he granted Oke bail in the sum of N100,000 with two sureties in like sum.
Oke who hails from Ogun State was remanded in prison custody pending when she will perfect her bail condition.
The matter was adjourned till 23 March, 2018.

It was gathered that while Oke was being taken to the prison, she said that Abiola was just wasting her time as she and Sadiq were already in love and she will soon be pregnant for him.

I Had No Child For Baba Suwe – Opeyemi Aiyeola