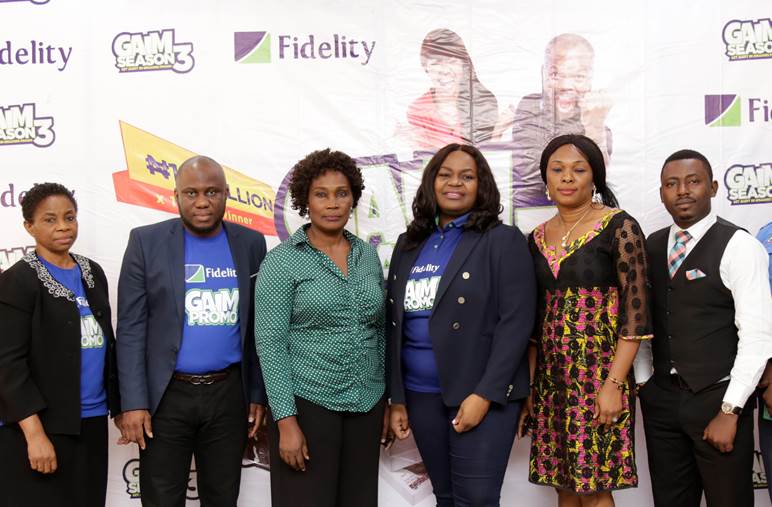 Fidelity Bank Plc on Tuesday gave out a total of N18 million worth of cash prizes to 12 winners of its “Get Alert in Millions Savings Promo (GAIM)” across the country.

The bank gave the prizes during its 4th monthly/2nd Bi-Monthly draw of “Get Alert in Millions Savings Promo (GAIM), Season 3,’’ held in Lagos.

The winners were selected through a computerised and transparent simple random system and picked from the bank’s branches across the six geo-political zones. Members of National Lottery Regulatory Commission and other lottery regulatory bodies in Nigeria were in attendance to witness the draw.

Mrs Chijioke Ugochukwu, Executive Director, Shared Services and Product of the bank, said that the bank still had N42 million left to give out in course of the promo.

Ugochukwu, who spoke on behalf of the MD/CEO of Fidelity Bank Plc, Mr Nnamdi Okonkwo, said the promo started in Oct. 2018 and would end in May, 2019.

“We started this journey in October 2018. At today’s draw, we will be giving out a total of N18 million to 12 customers.

“At the end of this draw today, we would have given out a total of N68 million in cash and 72 consolation prices to over 100 winners, counting from the previous draws held before this fourth one in this season 3 promo.

“And we still have N42 million to give out in subsequent draws up till the end of the promo in May,’’ she said.

“Existing customers are expected to top-up their account with N10, 000, while new account holders are to open with any amount, and grow the account to at least N20, 000 and above, to participate in the monthly draws.

“For the Bi-Monthly draw, you must grow the account to at least N50, 000 and above. “Any of the two categories of the draws could fetch you either promotional gifts, N1 million, N2 million, or N10 million respectively,” she explained.

Mr Richard Madiebo, Divisional Head, Retail Bank, expressed satisfaction with the promo. Madiebo said the bank had registered over 300,000 new customers since inception of the promo, adding that more customers are still expected to declare interest.

The bank put call across to some of the winners in congratulation for their won prizes.

Petrol to sell at N140 per litre from Wednesday