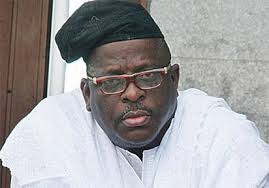 A Federal high court sitting in Lagos south west Nigeria has adjourned till 15th November, 2018  the suit filed by Senator representing Ogun East senatorial District Buruji Kasamu to forestall his fresh move by the Federal Government of Nigeria to extradite him to United State of America for drug related charges.

When the matter was mentioned today,Barrister O. O. Odubela -Nasir(mrs) the counsel representing Senator Buruji Kasamu, told the court that the matter was adjourned till today for hearing and all the respondents have been served with proof of service in court’s record consequently the presiding judge, Chukwujekwu Aneke asked to move her application.

Thereafter she told the court that the application which was dated 31st of May, 2018 but filed on 14th of June, 2018 supported by 33 paragraphs affidavit with three exhibit attached with however,the counsel representing Director of General State Security Service, Mr A O Bajela imform the court that he has not been served with the further affidavit filed by the counsel to the applicant, has only been served with reply on point of law.

Consequently, Justice Aneke adjourned for further hearing for the  applicant to regularize her position.

Senator Buruji KASAMU in affidavit sworn to and filed before the court averred that in a newspaper publication: titled “Kasamu:FG demands fresh US request for extradiction suit”wherein the Attorney General of the Federation was reported to have y said that “The US Government has been told to make a fresh request for the Senator after the former extradition proceedings were dismissed as soon as US Government sends a fresh request, the new extradition proceedings will be commenced”

Senator Kashamu averred further that, whereas in a proceeding instituted in England by US authorities against him at the bow street Magistrate court between 2002 and 2003 Government of United States of America ‘s Buruji Kashamu that he was not the one implicated in the alleged narcotics offence committed in the US in 1994,consequently he was not the person sought by the US authorities.

Consequently, he urged the court to restrain the respondents and their agents from arresting or detaining the applicant in any manner whatsoever interfering with the applicants’s right to personal liberty and freedom of movement.
However in a counter affidavit sworn to by NDLEA litigation officer Mr Kareem Olayinka,the deponent averred that Buruji Kasamu has never been exonerated of any complicity of any crime by any court either in Nigeria, United States of America or United Kingdom, so his talk of been exonerated of crime/charges of illicit traffic in narcotic drugs are false. The decision of British Court’s did not exonerate him of any drug charges

NDLEA is unaware of  any Interpol or indeed any law enforcement agency in OR outside Nigeria that investigated the applicant.

The Lagos division of the court of Appeal deprecated this conduct and declared it as lacking in cause of action in its judgement delivered on 4th of May, 2018.

Insult number FH /L /CS /508/2014 was for the enforcement of the  applicant’s fundamental  right on the fabricated and moot claim of a purported plot to abduct and kidnap him by law enforcement agencies and had nothing  to do with the execution of extradition request. That while the suit was pending,the Federal Government of the United States of America filed a request  for extradition of the applicant.

The NDLEA then received intelligence that the applicant who has been anticipating the request and monitoring events was about to flee the country and disappear .

That all the decisions the said Justice O. E. Abang  in both the substantive and contempt proceedings have been set aside and the provisional warrant of arrest validated by the court of Appeal in Appeals CA/L1030/2015.

Consequently, NDLEA contended that the essence of this suit by the applicant is to divert attention, as well as preempt or undermine the perceived extradition request to be made by the Government of the United States.

NDLEA urged the court to dismiss the suit for being incompetent and an abuse of legal process.