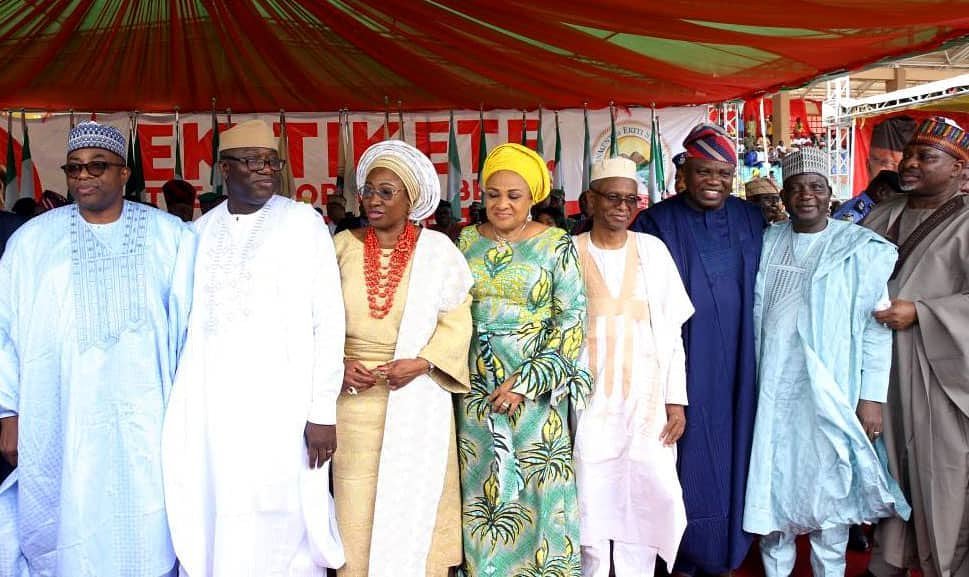 Former Minister of Mines and Steel Development, Kayode Fayemi, Tuesday formally took over the reins of power as governor of Ekiti State, with a vow to probe the administration of his predecessor, Ayo Fayose.

While delivering his inaugural address after taking his oath of office at the Ekiti Parapo Pavilion in Ado Ekiti, Mr Fayemi said the state had been in the throes of underdevelopment and financial crisis as a result of bad governance.

The inauguration was well attended by leaders of the All Progressives Congress (APC), including its national leader, Bola Tinubu; Bisi Akande; John Odigie-Oyegun; APC governors in the south-west and from the northern part of the country; cabinet ministers; and the Secretary to the Government of the Federation, Boss Mustapha, who represented President Muhammadu Buhari.

According to Mr Fayemi, preliminary investigations have shown that the immediate past government plunged the state into a debt of about N170 billion and committed the state to needless projects.

He said the economy of Ekiti is in a state of emergency, needing the support of the Federal Government within the provisions of the 1999 Constitution.

“Without a doubt, Ekiti has been through a terrible wilderness experience in the past four years; our reputation as a people has been soiled, and we have become the point of jokes, due to the crass ineptitude, loquacious ignorance and ravenous corruption masquerading as governance in our state during the past administration.

“As we assume office, it is our duty and we will live up to it and ensure we thoroughly review documents and widely disseminate the current state of affairs so that all and sundry can know what has become of our commonwealth.

“Independently verifiable preliminary findings indicate that we have been plunged into a debt of over N170 billion with commitments to innumerable white elephant projects; an average of eight months salaries owed across government entities, many state assets unaccounted for.

“We will ensure that within 100 days from today, Ekiti kete will know the true position of things in keeping with our ethos of transparency and accountability in government.

“We are not interested in trial by media; witch-hunting or playing to the gallery. We will seek out the truth and lay it before our people.”

The former minister also said his return as governor was not to settle scores with any one or on a revenge mission, but a healing balm on a painful wound.

“However, as the events of the past four years go into the history books, we will take duty to ourselves and generation coming after us, to work together to ensure that never again shall we be deceived into making such a grievous mistake that has set us back so steeply on the development curve,” he said.

He said Ekiti people should never again allow the leadership of the state to fall into the hands of those who do not know anything about governance or development. He also noted that his vision was to have a state where people would be safe and thrive.

Mr Fayemi listed agriculture, social investment, infrastructural development and entrenching knowledge economy as the focus of his administration in the next four years.

He also said he would be committed to paying all salary arrears, saying he would not rest until “the burning issue of payment of salaries is fully addressed.”

He also announced the reintroduction of the social safety net for the elderly and promised to improve education in the state and health care.

Efforts to get media aides to Mr Fayose, Idowu Adelusi and Lere Olayinka, to react to the address of the new governor were not fruitful, as they could not be reached on the phone.

But the Publicity Secretary of the Peoples Democratic Party in the State, Jackson Adebayo, said on Tuesday that the decision of Mr Fayemi to probe the Fayose administration was a welcome development.

He said there was nothing to fear as the government ran by Mr Fayose was transparent and devoid of corruption.

“Only the person who did evil will have reasons to be running away, the government we ran for four years was very transparent and devoid of corruption,” stated Mr Adebayo.

“I can tell you that Fayose is ready to answer any question on the way he ran his government whenever he is called upon to do so.

“He has even submitted himself to the EFCC today for probe, if he had done that, there was no need for Fayemi to be gesticulating about probing Fayose, he has already presented himself to the chief crime investigator in the country.”