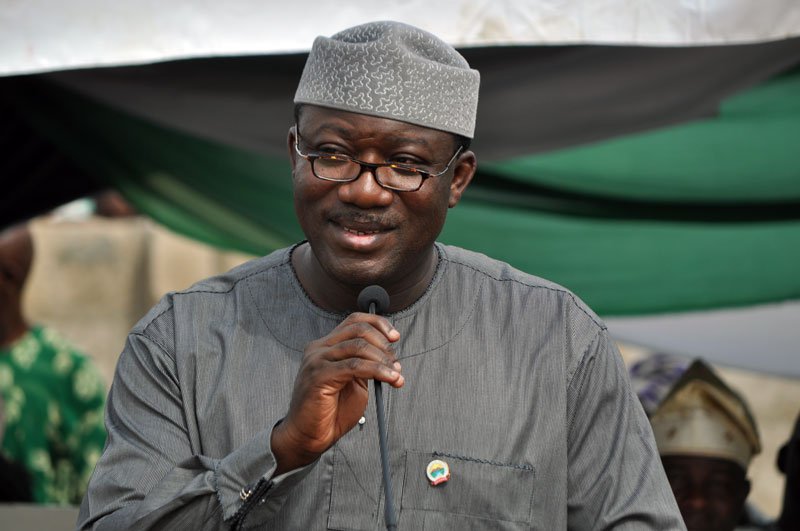 The Ekiti State governor, Kayode Fayemi, and his immediate predecessor, Ayo Fayose, have resumed contention over the management of the state resources as it concerns the Paris Club refunds and other funds from the Federal Government.

While Mr Fayemi has accused the former governor of plundering N18 billion received as Paris Club refunds, Mr Fayose has defended his stewardship, saying the inability of the state to pay workers’ salaries during his time was due to the burden of debts laid on the state by Mr Fayemi during his first term in office.

Mr Fayemi has blamed Mr Fayose for failing to pay workers salaries for between four and eight months, despite collecting N18billion, which he said the former governor preferred to divert to other uses.

The governor, who spoke on Sunday while featuring on a media programme, “Meet Your Governor, said he has not reneged on his stated commitment to offset all the outstanding salaries and pension entitlements before the end of his first year in office.

“I have not collected any money in the fashion of road intervention or Paris Club refund. Governor Fayose had the opportunity of paying the bulk of these backlog of salaries and pensions,” Mr Fayemi said.

“He collected a sum of N18billion out of the N21.5billion due to Ekiti in the fund, so what is left for Ekiti is just N3.5billion, which can’t pay a month if we add the overhead costs of subvented institutions.

“As we speak, we are doing a lot of cleansing and that had reduced the monthly pay to workers to N2.1billion. Those not properly employed have been left out until they provide evidence. The medical workers that were employed on consequential ground have been reabsorbed.

“I don’t want to do media trial for anyone, so I have hired the services of a renowned audit firm to look into our finances and the forensic state’s accounts will be published during our 100 days in office in January, 2019.”

But Mr Fayose has responded to the governor’s allegations, saying he should use the N30billion his government collected from the centre as refunds on federal roads construction, arrears of Budget Support and Paris Club refund to pay workers’ salaries instead of lying against his predecessor.

Mr Fayose, in a statement by his media aide, Lere Olayinka, on Monday, said the governor’s allegation was a weak attempt at deceiving the people.

“The governor should rather explain to Ekiti people, especially the workers why he prompted the federal government to withhold N2.1billion arrears of Budget Support and N14.1 billion Paris Club refund, which was approved for payment to the State in June this year,” said Mr Olayinka.

“It was on the basis of the N2.1 billion arrears of Budget Support and N14.1 billion Paris Club refund already approved for payment in June that Fayose promised to clear the salary arrears. But due to his bitter politics, Fayemi blocked the payment and more than one month after receiving the payment, he is still following his usual path of deceit instead of paying the workers.”

He also challenged Mr Fayemi to make the records of disbursement of the Paris Club Refund received by the state public, saying there were conditions laid down by the federal governments before the fund was released and states were made to make reports of utilisation of first tranche of the refund before the second tranche was released.

“Besides, the fund was meant for both the state and local governments and it is on record that Ekiti fell into the hardship of inability to pay salaries regularly as a result of debt incurred during Fayemi’s first tenure and the loans restructuring done at the instance of the federal government and the Federal Economic Council,” the statement further said.

“If Fayemi had not plunged Ekiti into unnecessary debt, over N1billion wouldn’t have been deducted monthly from the State’s federal allocation. And if the APC government had not crippled the country’s economy, allocation to Ekiti State wouldn’t have reduced to less than N1 billion at some point.”

“The reality is that Fayemi is reputed for speaking from both sides of his mouth. In the past, he described Fayose as an honourable person whose word is always his bond and today, he goes about denigrating the same Fayose.”