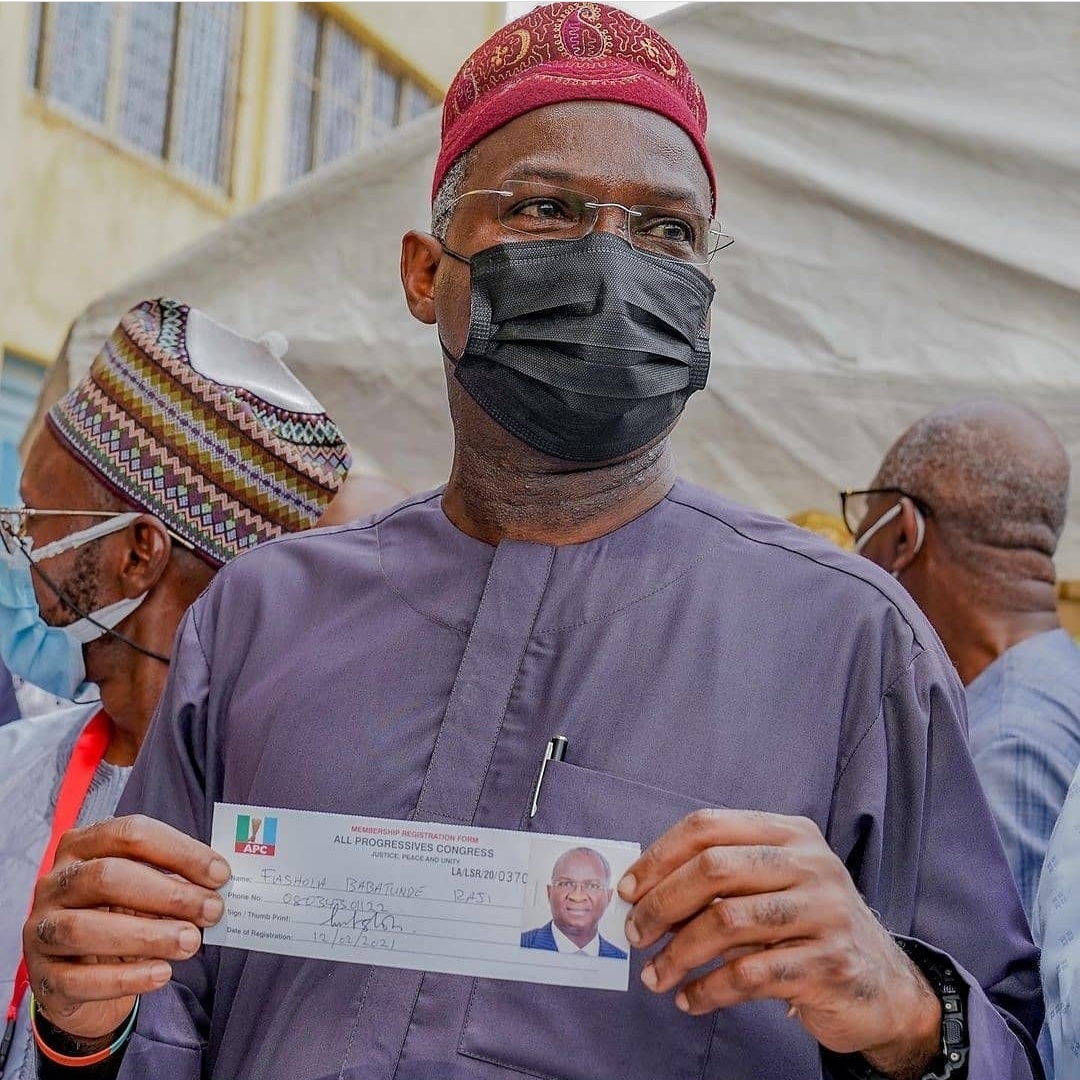 Minister of Works and Housing Mr Babatunde Fashola has called on Nigerians to join the All Progressives Congress (APC) to move the country forward.
He spoke on Friday after he and his wife, Abimbola revalidated their membership of the party at State Junior Grammar School, Itolo, Surulere, Lagos.
The former governor of Lagos state was accompanied to his ward by the Managing Director of the Federal Housing Authority (FHA), Senator Gbenga Ashafa, Chairman of Surulere Local Government, Mr Tajudeen Ajide, his counterparts at Coker-Aguda and Itire-Ikate Local Council Development Areas (LCDAs), Mrs Omobolanle Akinyemi-Obe and Dr Ahmed Apatira.

According to him, the party’s revalidation and registration exercise would clean up the party.
He added that the exercise was an opportunity for as many who were willing, especially the youths, to identify with the progressive ideals of the APC.

“Nothing can trump the progressive ideals, progressivism is about improving the human condition and that is why we are APC and so anybody who is concerned about improving human condition, developing his environment, his community, this is the party that I recommend to them,” he said.
The exercise, he said, would aid in identifying the true members of the APC.
He said: “We are a large political family and it is always important to know how many we are and also to increase the number that we are. So this registration exercise first brings about all family members in all wards and polling stations of the country together.
”And this is going on in 120,000 polling stations across Nigeria, so, it’s a coming back together but more importantly, it is also a period for evangelism, expansion of the party database, party membership and updating.
“You will see in the past, we have had some unfortunate incidents where perhaps some people were appointed only for us to find out that they are deceased. So this is also an opportunity to clean up.

“Because there are opportunities also as a member of a party that forms a government, all the appointments and so many things.
“And we need to know who is where, we also need to know what party members do. So, if I am a party member and want to host an event, I can look in my party’s database and see who does event planning, who does catering and we share prosperity,” he said.
He hailed President Muhammadu Buhari, Chief Bisi Akande, Asiwaju Bola Ahmed Tinubu, Governor Yahya Bello and other leaders of the party who had shown positive example by taking part in the exercise.

Yoruba Are No Strangers To War, But…, By Kayode Ogundamisi