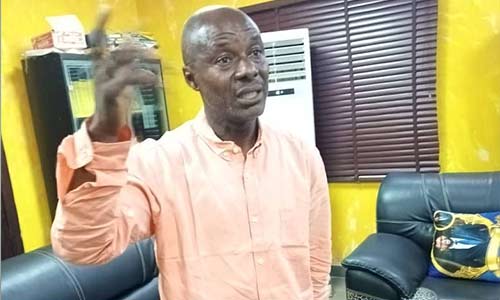 A fake Lawyer,  Sylvester Ogbogu Who was caught attempting to sell a Petrol Station for N1.6B has been jailed for one year without the option of fine.

The convict was caught as a result of a planned attempt to sell a filling station, World Oil Industries Ltd situated at Lekki-Epe Express Road..

According to the report made available to BarristerNG by the Publicity Secretary, Chinelo Nonyelu, the Case was handled by the Human Rights/Probono Committee Team of NBA OTA Branch.

The Convict, Sylvester Ogbogu, had claimed that he obtained his LL.B degree from the Ambrose Alli University, Ekpoma in 2003 and thereafter obtained his LL.M from the University of Benin after years of his being called to the Nigerian Bar.

Meanwhile, his proposed buyer of the petrol station had already signified their interest to purchase the said filling station via separate letters.

In addition, the company replied via another letter dated 21st day of July, 2020 with an acceptance “subject to contract”.

According to the information made available to newsmen by a law firm of Ogbah Isaac & Co., Sylvester Ogbogu the convict accepted the offer of N1.6B for the purchase of the said filling station made by the buyer, and in his bid to fraudulently obtain the photocopies of the title documents from the lawyers to World Oil Industries Ltd, he described himself to have obtained his LL.B degree from the Ambrose Alli University, Ekpoma in 2003 and thereafter obtained his LL.M from the University of Benin after years of his being called to the Nigerian Bar, to approach the law firm of Ogbah Isaac & Co, for the said title documents.

It was in the process of his intent to obtain the title documents that made the Managing Partner of the firm, Isaac Ogbah, FICMC, the immediate past Chairman of the NBA Ota Branch, to interrogate and question the rationale of a lawyer claiming to represent a client who never briefed him to represent them in the first place coupled with the fact that he never met the owners of the station or received their instructions to offer their property for sale at any point in time.

In the course of further interrogation carried on the convict by the Executive Committee members of the NBA OTA Branch, several items were recovered from him, including but not limited to several Letter headed papers bearing the law firm of OGBOGU AND OGBOGU & Co, copies of Quit Notices and Power of Attorney issued and franked by him as a lawyer; lawyer’s Bib and several letters written by the said suspect in his bid to fraudulently sell the company’s filling station.