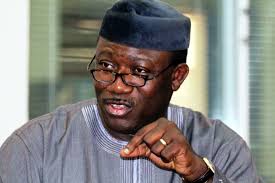 The House of Representatives has passed a vote of no confidence on Nigeria’s mines and steel minister, Kayode Fayemi; his state counterpart, Bawa Bwari; and the sole administrator of the Ajaokuta steel company.

In a motion moved by the house leader, Femi Gbajabiamila, the lawmakers also resolved to set up a ‘powerful investigative ad-hoc committee’ to investigate all the ”surrounding events in the Ajaokuta steel company.”

Moving the motion, Mr. Gbajabiamila described the trio’s action as contempt against the house.

“The minister did not have the courtesy to reply but asked the permanent secretary to do so two weeks later,” the lawmaker said.

He added that the sectoral debate the officials were invited to attend was for the good of the country and ”will serve as an opportunity for the actors to clear the air.”

“The debate gives ample opportunity to clear the air against all accusations, there is more to it than meets the eyes. This is an assault on common sense for the two ministers to have done this,” he added.

Contributing to the motion, Chief Whip of the House, Alhassan Ado-Doguwa, condemned the action of the minister, saying it ”shouldn’t come when the country is looking for means to tackle poverty and diversify the economy.”

“Whatever we do here is not about us but for the country,” he said.

He accused the ministers of undermining the institution of the House of Representatives.

“Their absence means something suspicious, insensitive to the plight of the people,” he said.

Also, the minority whip, Umar Barde, called on his colleagues to drop political sentiments and put the nation first.

He wondered what ”committee chairmen were going through if the speaker can be disrespected in this manner.”

“If this can be done to the speaker, I wonder what committee chairmen are going through.”

Another member from Niger State, Mohammed Bago, attributed the ‘impudence’ of the ministers to what he described as ”unnecessary romance with the executive”.

“It can’t happen in the Senate. Let us invoke all instruments of legislation and bring them to order,” Mr. Bago said.

Mr. Fayemi and his state counterpart on Thursday boycotted a sectional debate organised by the House focusing on the steel sector and specifically on how to revive the moribund Ajaokuta Steel Company in Kogi State.

The ministers allegedly ‘instructed’ the sole administrator of the Ajaokuta steel company to also boycott the debate. PREMIUM TIMES could not confirm this allegation.

The ministry also did not send a representative to the debate.

The Ministry of Solid Minerals Development on Tuesday wrote to Mr. Dogara that the ministers will not be able to attend.

In the letter with reference No MMSD/S/BUDG2017, the Permanent Secretary of the ministry, Abdulkadir Muazu, said the ministers “are slated for official engagements during the scheduled period of the debate.”

This is not the first time Mr. Fayemi will be embroiled in controversy over his actions as minister.

The minister has been criticised for signing a “renewed Share Purchase Agreement, SPA” with a Russian firm, UC RUSAL for the takeover of the Aluminium Smelter Company of Nigeria, ALSCON, Ikot Abasi in Akwa Ibom State in apparent defiance of a court ruling.

Mr. Fayemi’s move appeared to indicate his continued contempt of the July 6, 2012 Supreme Court “order of specific performance” to the Bureau for Public Enterprise, BPE on how to resolve the ownership tussle for the smelter.

The Supreme Court had ordered the BPE to provide a mutually agreed SPA for execution along with BFIG Group, the Nigerian-American Consortium declared winner of the bid for ALSCON in 2004 by National Council on Privatisation, NCP.

The Court also issued an order of perpetual injunction restraining BPE from inviting any further bidding for the sale and acquisition of ALSCON in violation of its contract with BFIG.

He is also having pitched battles with his state governor, Ayodele Fayose of Ekiti State, who had set up a panel to investigate alleged acts of fraud by Mr. Fayemi while he held sway in office as state governor.

The state government recently banned Mr. Fayemi from holding public office in the state for 10 years.

The ban followed the indictment of Mr. Fayemi by the judicial commission of inquiry which probed his tenure as governor between 2010-2014. A white paper stipulating the ban was released immediately.

The state also banned Dapo Kolawole, who served as commissioner for finance under Mr. Fayemi.

In a reaction, Mr. Fayemi dismissed the verdict of the white paper as “a joke taken too far”. He said it was “perhaps a joke of the century” that “shall not stand”.