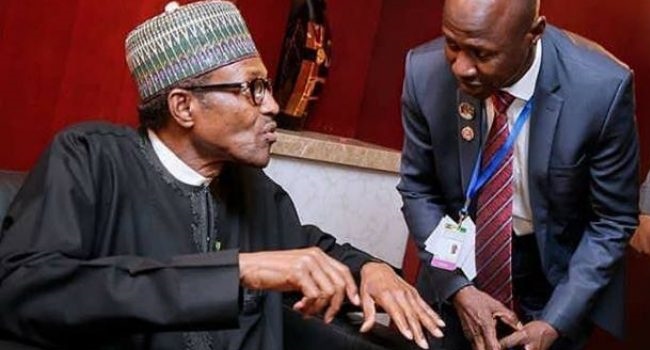 The intrigues surrounding the search for the new helmsman of the Economic and Financial Crimes Commission (EFCC) might soon end as associates of President Muhammadu Buhari are now said to be pushing their candidates to replace Ibrahim Magu, the suspended acting Chairman of the country’s anti-graft body.

Sources claimed that the Attorney Greneral and Minister of Justice, Abubakar Malami has submitted some names, and so did President Buhari’s Chief of Staff, Professor Ibrahim Gambari.

Among the candidates touted to be eyeing the position are retired Deputy Inspector-General of Police, (DIG) Mohammed Sani Usman, and Commissioner of Police, (CP) Bala Ciroma. Ciroma who is currently the CP for the Federal Capital Territory, (FCT), Abuja.

Prior to the submissions, President Buhari had reportedly penciled down DIG Umar and ex-CP Diseye Nsirim-Poweigba as possible replacements, said a report by THEWILL.

More so, recent information has it that two retired senior police officers from the Southwest had joined the long list.

The duo had headed the strategic Special Fraud Unit (SFU) of the Nigeria Police at different times.

The possible emergence of either Lakanu, or Ogunsakin will significantly change public view about the appointment of an EFCC chairman being north-centric, a top source said.

“Past EFCC chairmen had all come from the north except (ex-DIG Farida) Waziri from the Middle-Belt.

“From Nuhu Ribadu, Ibrahim Lamorde and the suspended Ibrahim Magu, but I believe President Buhari favours competence over ethnic affiliation.

“So, he has no problem picking a competent southerner,” said the source holding a top position in Nigeria’s strategic policy institution.

This medium also learned that Ogunsakin had lobbied President Buhari’s close friends including one who passed on recently. Notwithstanding, Ogunsakin’s interest, Malami allegedly seemed more impressed with Lakanu’s records of accomplishment in the police.

In a report, SATURDAY INDEPENDENT quoted Malami as saying he “will recommend this candidate to the President because his CV shows that he is more credible than the rest.”

However, we could not ascertain the Minister’s statement as at time of filing this report.

A former course mate, also a CP, said that he doubted Lakanu was pushing his way to becoming the EFCC Chairman.

“Those who knew Taiwo from when he was in the Force would tell you he doesn’t push himself in people’s faces or nurse ambitions inordinately. I doubt he has changed.

“If his name has come up, as you claimed, it would not have come from him, but from those we find him worthy and capable of advancing President Buhari’s anti-corruption fight,” he said.

For now, the said Lakanu appears a dark horse in the race, though possesses stellar public records.

Gleaning from his bio-data found on the internet showed Lakanu, a University of Lagos graduate, as diligent, disciplined, and award-winning police officer during his service career.

He has two graduate degrees, a Masters in Law from the UK’s Leeds Metropolitan University, and other certifications from professional training courses.

Efforts to get Lakanu to respond to the story was not successful as his aide did not return our request for a comment.