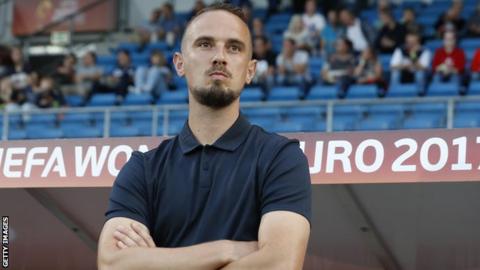 Mark Sampson, the former coach of England women’s team has been accused of not wanting to sign a certain Nigerian footballer for Stevenage football club because he is black.

According to Mail Online Football, the FA are investigating after receiving a complaint about an alleged racially discriminatory comment made during a conversation about potential transfer targets earlier this month at Stevenage football club.

The alleged incident is understood to have occurred on transfer deadline day on 2 September during a discussion amongst Stevenage’s coaching staff about potential transfer targets.

It was claimed that when the name of a centre-half was mentioned as a possible signing, Sampson who recently joined the club’s coaching staff, allegedly responded that the club should not recruit him because he was Nigerian.

‘We are aware of the allegations and we are investigating the matter,’ a spokesperson confirmed on Wednesday night.

It is not the first time he has been accused of making racially discriminatory comments.

In 2017, Eniola Aluko, who is the elder sister of Nigeria striker Sone Aluko, accused him of subjecting herself and her Nigerian family to a ‘racist’ jibe about the ebola virus.

Eni claimed Sampson told her to ensure her Nigerian relatives did not bring the Ebola virus to London ahead of England’s friendly against Germany at Wembley in 2014.

Later that year, Sampson was sacked by the FA after they found ‘clear evidence of inappropriate relationships the Welshman had with female players while he was the manager of Bristol Academy.