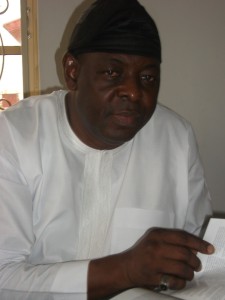 Love comes with a twist. Beneath its syrupy savour lies a bitter, sour tang. Ask Otunba Alex Onabanjo. There is whispers in top quarters that the marriage of the popular businessman to Lanre Adesanya-Onabanjo, his wife of over 40 years, has come to an abrupt end.

Bliss deserted Alex’s marriage in unexpected hours, like a crushed knight fleeing the gates of a fallen fortress. To him, the love that warmed the inner cockles of his heart soon became the thorn that pierced his lungs while he inhaled the fragrance of passion. Thus his marriage to Lanre (aka Sisi Bus Stop), allegedly crashed irredeemably, while they were busy doing other things.

It will be recalled that his daughter, Moji’s marriage to Gbenga Obasanjo ended on a sad note. However, Moji has since re-married. Her new husband is Dr Abiodun Mustapha Akinkunmi, an IT expert. Akinkunmi is a former Lagos Commissioner of Finance, who was kicked out of government last year, by his principal, Governor Akinwumi Ambode.

When the going was good, Onabanjo and his wife were a model couple to their children, business associates, family and friends. Everybody wished for their kind of wedlock as the affluent couple radiated infectious love and companionship.
It was therefore, a rude shock to their loved ones when news of their separation broke out.

Sources disclosed that the union between the Onabanjos, began to suffer cracks shortly after their third daughter, Omobusola got married.

It was gathered that the couple was involved in a property project in Parkview Estate, Ikoyi. They then decided to move from their GRA Ikeja residence, and moved to a smaller apartment in Ikoyi, pending when their mansion would be ready. But no sooner had they settled down to live together than Alex O decided to move out and leave Lanre behind.

Needless to say Lanre was shattered. She felt betrayed by the man she had looked up to, stood by through thick and thin. But Alex O stood his ground and insisted he was determined to spend the rest of his life without his wife of over 40 years, mother of his five daughters and grandmother of several grandchildren. And he has since refused to shift his position.

The couple’s children reportedly made efforts to reconcile them, but their efforts proved to be futile. The relationship was strained beyond redemption.

While Alex O now lives like a bachelor, his wife shuttles between the homes of her daughter’s, playing the dotting grandma, while running her Aso-Oke business in Victoria Island.

No Plan To Return To PDP – Gov. Ahmed