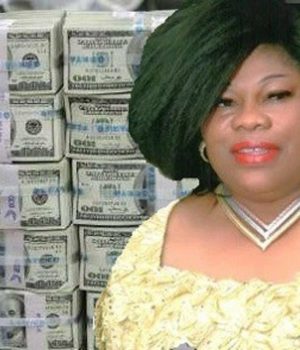 The Economic and Financial Crimes Commission, EFCC, has arrested Dr. Ngozi Olojeme, former Chairman of the Nigeria Social Insurance Trust Fund, NSITF and 2015 Deputy Chairman, Finance Committee of the Goodluck Jonathan Campaign Organisation over the alleged embezzlement and diversion of the fund.

Ngozi Olojeme Olojeme, who was declared wanted some months ago was said to have turned herself in and has made useful statement to the EFCC’s investigators. Probe report obtained indicated that some of the cash embezzled had been used for electioneering in the 2015 general election.

A source at the EFCC speaking to our reporter said: Months after running, Mrs. Olojeme finally turned herself in. She is currently being detained and we have identified most of her properties. ‘We have been investigating fraud of over N62.3billion in NSITF during Olojeme’s tenure between 2009 and 2015.

Out of the sum, preliminary findings indicated that the ex-NSITF boss allegedly diverted $48, 485, 127. ‘She allegedly used her account officer in First Bank of Nigeria (FBN) to collect the $48.4m from some NSITF contractors through a BDC operator.” “Olojeme has made useful statement to our team of investigators. We are probing clues that some of the looted cash had been diverted to the prosecution of the 2015 general election because Olojeme was the Deputy Chairman, Finance Committee, of the Goodluck Jonathan Presidential Campaign Organisation.

“From preliminary findings, she is likely to face trial like other top officers of NSITF.” The probe report states: That through this process, Dr. Ngozi Olojeme, the then NSITF board chairman, has collected $48,485,127 from her account officer at FBN, which cash he collected on her behalf being the dollar equivalent of monies paid to BDCs by NSITF contractors.

‘She and others also diverted huge cash allocated for allowances of its staff and compensation to contributors. Detectives actually traced some of the NSITF funds in the personal accounts of Olojeme and the former MD, Umar Abubakar. ‘For instance, Abubakar and others converted N18billion, being contribution from the Federal Government as take-off grants and Employees Compensation Scheme (ECS) for MDAs.

‘The said sum was diverted into personal accounts by an e-payment mandate jointly signed by Umar Munir Abubakar and Henry Ekhasomi Sambo.” ‘It was discovered that the NSITF accounts in First Bank and other banks have witnessed a total turnover of over N62,358,401,927 between 2012 and 2015 from the Employee Compensation Scheme contributions.

‘That out of the N62b, the Federal Government contributed N13,600,000,000 while N48,758,401,927.80 was contributed by the private sector. That there were several payments to individuals and companies from the NSITF bank accounts for purported contracts or consultancy services. ‘That some individuals and companies that received these payments, in turn, transferred part of the monies directly to the NSITF officials while others transferred huge sums to bureaux de change operators who changed them to dollars.’

Tears, Sadness as Kogi Workers Besiege Banks Only To Get One, or Two Months, Salary In Percentage