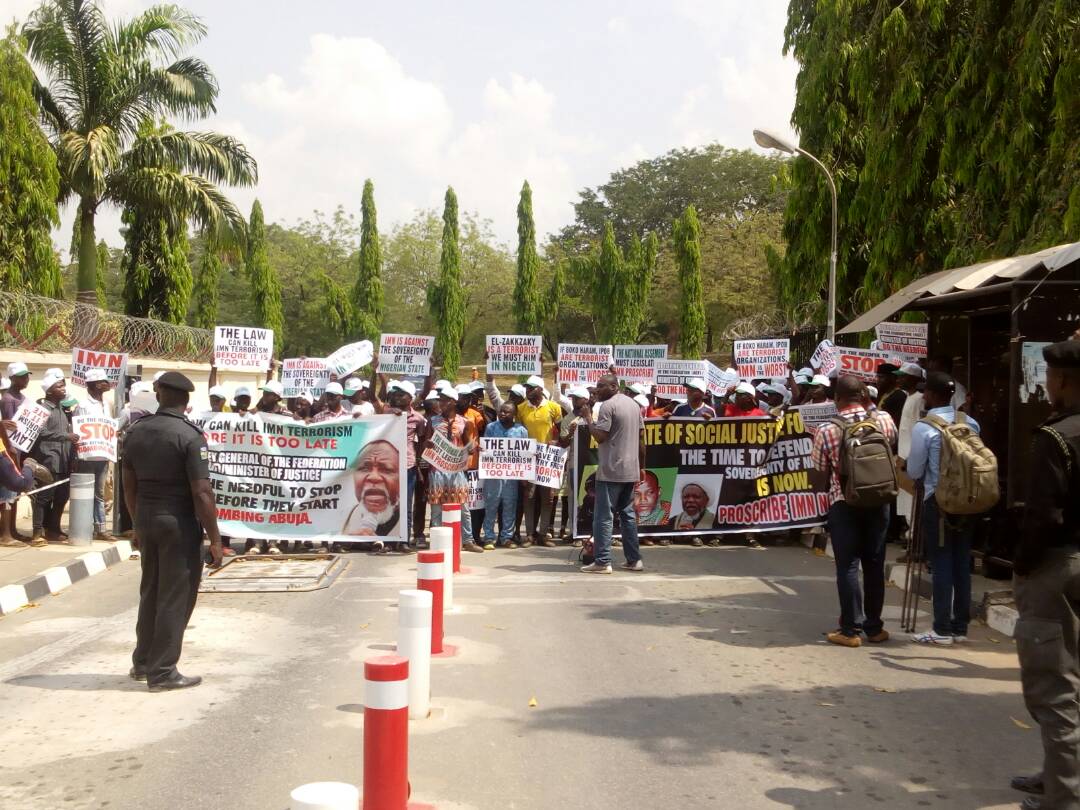 More trouble seems to be brewing in the air for detained leader of the Islamic Movement of Nigeria [IMN], Ibrahim El-Zakzaky as a large number of protesters Friday besieged the office of the Attorney General of the Federation, Abubakar Malami to demand the immediate proscription of the group and subsequent designation as a terrorist organization.

The protesters, who were sighted with placards, bearing various inscriptions, informed the AGF that the activities of the INM has the potential of making life unbearable for innocent Nigerians if something is not done and urgently so.

This development is coming barely one week after Coalition Of Civil Society Organizations For Transparency and Good Governance (COCSOTGG), called on the Presidency and the Attorney General of the Federation to act fast in designating the Islamic Movement of Nigeria, (IMN) a Terrorists group before it’s too late.

According to the protesting group, under the aegis of Advocates of Social Justice for All (ASJA) , IMN had in recent weeks revived it’s activities with the aim of testing the waters to see what government’s response would be.

Speaking on behalf of the group, Torkuma V Asogo, Executive Director, ASJA said the protest became imperative following the silence of the AGF on the activities of the Islamic group.

Asogo said, “IMN’s link to Iran, a major state sponsor of terrorism, is not in doubt. This to us calls for not just concern but underscores the need to be proactive especially in the light of a recent CIA report that clearly indicted Iran for sponsoring terrorism to destabilize other countries.

“Other nations have taken steps to designate groups connected to Iran as terror organizations to ensure the safety of their citizens. Nigeria must be the only country that allows an Iranian sponsored terror group to go around attacking security agents and harassing citizens without consequences. This is simply unacceptable.

“Iran’s backing of IMN has emboldened it as a terror group. Its members have openly confronted the military, the police and even our defenseless population the last being the attack on the Police in Abuja. Before this, IMN has made life unbearable to the population of Nigerians living within its sphere of influence. It even went as far as declaring for itself a parallel government.

“Other countries of the world are using the law and the military to deal with terrorism. Where the law fails they then resort to military might. In our own case one approach, the military approach, seems to be the only tool deployed by government so far and this can only stretch the military and hand terrorists unfair advantage. This has been proven in the case of IMN, which is regrouping as we speak because it is able to exploit the loopholes created by the failure to fully apply the law in the case of its members.

“This rally to your office is for us to demand the proscription of IMN, which the Kaduna State Government outlawed and properly documented in its gazette a long time ago. Several other states have toed the same path but this kind of installment approach is not adequate to deal with the threat posed by IMN considering its international sponsorship as terror group.

“We therefore decided it is time to make this demand because of the increasing threats of IMN militants. We consequently demand that the Office of the Attorney General of the Federation properly designate IMN as a terrorist organization since its menace is growing every day and without any check from the Federal Government its criminal acts of terror will spread to other parts of the country.

“The laws are unequivocal in the procedures for declaring a group as a terror organization. This has been tested sufficiently tested with the designation of the Indigenous People of Biafra (IPOB) as a terrorist group in the South East, immediately curtailed the terrorist activities of the group.

“We therefore want to say enough is enough in the issue of IMN unless the Attorney General is telling us that security concerns in the south-east is more important than the same in the north. Within the shortest time of IPOB being declared a terror group an appreciable level of stability has returned to the south-east that was once on the brink of becoming a hotbed of terrorist activities.”

2019 presidency: Yoruba youths reveal why Atiku must return to PDP