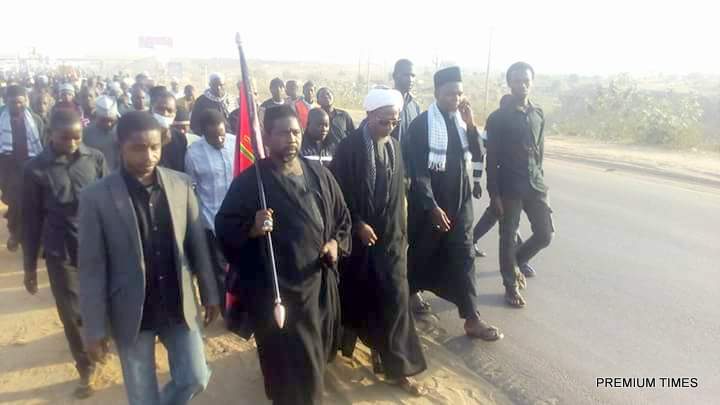 The police have detained an activist, Deji Adeyanju, at the venue of a protest for the release of Ibrahim El-Zakzaky.

Mr El-Zakzaky, a Shiite cleric and leader of the Islamic Movement of Nigeria, has been in detention since 2015 when Nigerian soldiers massacred and killed over 300 of his followers.

Mr Adeyanju has been leading daily sit-outs for the cleric’s release over the past three months.

Details of his arrest are still fluid, but he is believed to have been arrested by the FCT police command at Unity Fountain, venue of the rally.

Mr Adeyanju responded to his arrest via a text message Friday afternoon.

“Police arrested me at Unity Fountain over #FreeZakzaky,” the activist said.

Mr Adeyanju appeared on the station Wednesday morning to accuse President Muhammadu Buhari of hiding the reason for his latest trip to London.

The president embarked on the journey on Monday, saying he wanted to hold some meetings ahead of 2018 Commonwealth Head of Government Meeting in London.

Mr Buhari’s decision to go to London nine days ahead of the meeting had raised a lot of eyebrows amongst Nigerians.

Mr Adeyanju said the president was going for another round of treatment. The president had previously spent 105 days in London on medical treatment in 2017.

Austin Braimoh, leader of BMSG, said law enforcement agencies should immediately detain Mr Adeyanju because his claim was not factual.

The president was seen later on Wednesday in a London meeting with Justin Welby, Archbishop of Canterbury.

It was not immediately clear whether his arrest at Shiites rally today had any connection with the call by Mr Buhari’s supporters for Mr Adeyanju’s arrest.

Concerned Nigerians, a civil group affiliated to Mr Adeyanju, has called for the release of the activist.