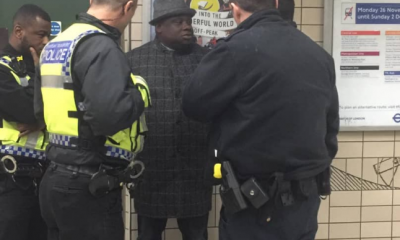 Otunba Akinyele was said to have been arrested at London Paddington Station following complaints that he had swindled many unsuspecting people of funds running into millions of British Pounds.

Akinyele, who is a candidate for elective office in his home State of Ekiti, allegedly introduced himself to his victims as “Tony Woods” claiming to be a South African investment agent.

Report had it that his fraud and money laundering schemes involved several accomplices top amongst, which is his London based wife who goes by the name of “Stephanie.”

One of the pictures of his arrest at the Train Station reportedly showed him trying to cover his face, but his face was clearly visible in another one.

It was gathered that in a video of the incident, one of the arresting police officers could be heard reading him his rights and asking him if he wanted his legal representative to be present during his questioning.

We were informed that the bubble burst for Akinyele, when the funds invested with him failed to yield the promised dividends leading his “investors” to raise serious queries.

This allegedly led to discoveries that all documentation including bank statements, customs papers and investment certificates provided by the so called “Tony Woods” were false documents.

Sources stated that, when confronted by his victims, Akinyele went underground.

“Consequently, criminal complaints were made against him leading to him being arrested by the London Metropolitan Police.

“He was taken in for questioning and released on bail pending further investigations,” said a source.

It was however, reported that he jumped bail and fled back home to Nigeria, where he is the candidate of the Peoples Democratic Party (PDP) for the Ekiti State House of Assembly Efon Constituency seat at the elections scheduled for March 2nd, 2019.

Investigations in Ekiti State revealed that Otunba Akinyele is a flamboyant politician, who presents himself as a philanthropist to people in his Efon Alaaye hometown.

Sources stated that over the last two years, he had brazenly been flaunting his ill-gotten wealth, acquiring several chieftaincy titles, buying numerous vehicles for people and giving large sums of money to persuade them to vote him into office in the Ekiti State House of Assembly.

“Although he has no credentials or work experience to recommend him for the office, Akinyele proudly asserts that with the huge treasure chest he has at his disposal, nothing will stop him from winning the election,” a source said.

Meanwhile, reports indicated that the London Metropolitan Police has sought the assistance of Interpol to have him arrested and extradited to London, where he would be charged to court on several counts of investment fraud, money laundering and misdemeanor bail jumping.

My mother told me to poison my father, boy tells court

Saraki: If I had skeleton in my cupboard, this govt would have silenced me