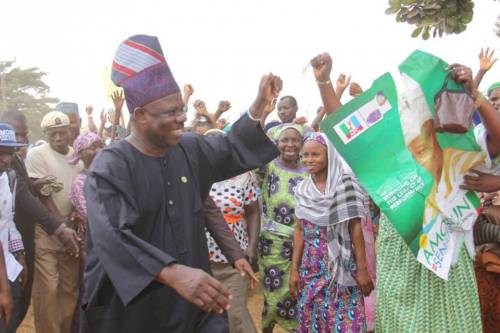 The succession tussle of the Agura of Gbagura in Ogun State is taking a serious dimension as the Egiri Ruling House in the area have accused the out-going Governor of the state, Mr. Ibikunle Amosun of plans to impose his candidate as the new Oba of the area.

Sources within the ruling house alleged that Amosun is colluding with Rtd. Justice Ademola Bakre-OON, who they said claimed to be  the Head of Egiri Ruling House, to instal Prince Saburi Babajide Bakre, who they alleged was his nephew, as the next Agura of Gbagura.

It was gathered that the Princes recently met and agreed to resist any attempt to impose the new Agura of Gbagura on the community.

We gathered that members of the public have been alerted of this move via a communique released at the end of a meeting of the princes in Egiri Ruling House and that the authorities of Abeokuta North Local Government have been informed not to “recognise anybody yet as the new Agura of Gbagura,” until further notice.

“Governor Ibikunle Amosun wants to leave a bad legacy in the state. “We will not allow him to completely destroy Ogun State before he leaves office on May 29, 2019.

“Amosun has destroyed almost all the fabrics of our state and we will not allow him to do more or use Gbagura as a Guinea Pig.

“How could Amosun be thinking of imposing an Oba on Gbagura. “We have our own style, we have our ethics and we will follow this to the letter. There is nothing Amosun or Justice Bakre could do about this,” said a source close to Egiri Ruling House.

Members of the family were said to be meeting with all the necessary stakeholders in the state to ensure that Governor Amosun and Justice Ademola Bakre-OON do not achieve their aim and that the people of the area had been placed on red alert to resist any attempt to “force anybody on them.”

“It would not work, our people are battle ready and they know their left from their right. There is nothing Governor Amosun or Justice Bakre can do about this.

“We are different from other settlements, where they have successfully imposed their candidates on the people.

“This will not work and we ready to deal with them with all the powers within us,” said another source in Egiri Family, who added that “Amosun should be ready to battle with the people and their gods if he insists on going ahead with his actions.”

Presidential election: Obasanjo has paid assassins to kill me, my son for supporting Buhari – Wife alleges