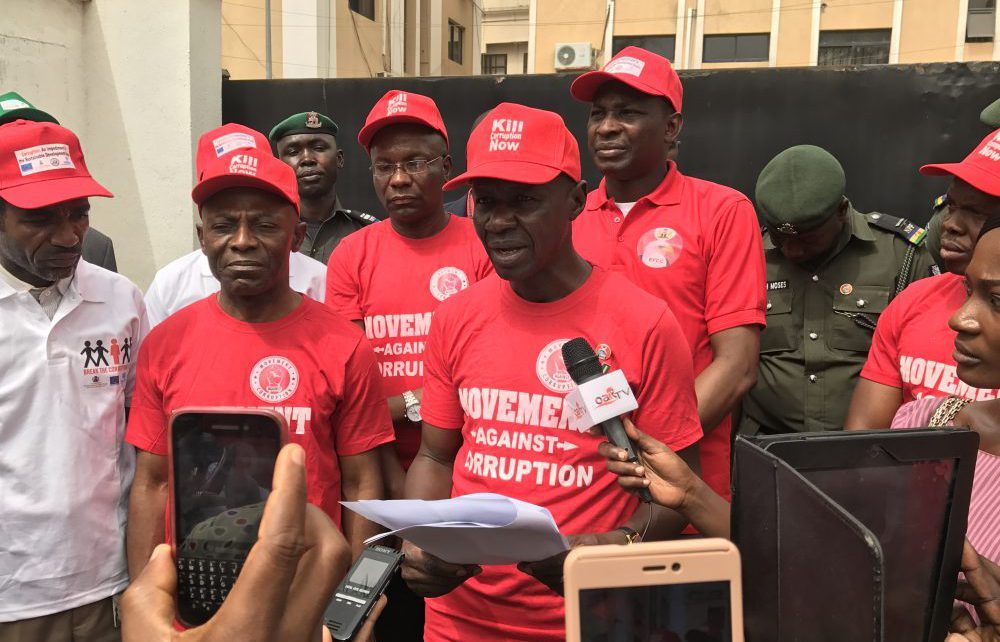 The Economic and Financial Crimes Commission (EFCC) confirmed on Monday that a building housing the apartment occupied by two sons of Atiku Abubakar was raided over the weekend, but the anti-graft office denied vehemently the operation had anything to do with the opposition presidential candidate’s family.

Premium Times broke the news of the raid on Monday morning, citing multiple sources familiar with the Saturday search and a corroboration from Paul Ibe, a longtime spokesperson for the Abubakars.

The building in the highbrow Maitama neighbourhood also houses an apartment occupied by sons of Theodore Orji, the former governor of Abia State who has been under corruption investigation by the EFCC.

In a statement Monday afternoon, the EFCC said the raid was strictly targeted at Mr Orji’s sons, some of whom were arrested and their cars confiscated.

“The recent arrest of Ogbonna Orji, son of Sen. Theodore Orji, over money laundering, has absolutely nothing to do with son of ex-VP Atiku Abubakar.

“The former Abia governor has been under investigations by the EFCC, for money laundering activities, which was discovered to have been carried out through his sons.

“The EFCC had been on the trail of cars allegedly bought by the sons, and last Friday the cars were traced to a night club in Abuja, where operatives waited patiently through the night to arrest the owners – Ogbonna and his friend, Kelvin Ilonah.

“They were arrested at about 5am on Saturday, and they led operatives to their three-flat apartment, where documents retrieved showed that it was rented at a rate of N13million per annum.

“They have so far given useful information to the EFCC, which is aiding in investigations. It should be made clear that the EFCC never “went after” Atiku’s sons, neither was Atiku’s son arrested by the EFCC,” a string of tweets by the EFCC said in full.

In our earlier exclusive report, this newspaper did not say Mr Abubakar’s sons were arrested. The report stated that both of them were out of the country during the raid.

An aide to ex-Abia governor Theodore Orji contacted this newspaper saying the raid was not targeted at them but at Mr Abubakar’s children. The aide said the family would consider issuing a statement on the matter.

In his reaction to the EFCC statement, Mr Ibe, speaking for Mr Abubakar’s family, said it does not add up and exposes the “shabbiness” of the government’s anti-corruption campaign.

“The EFCC has seen the huge support which Nigerians showed towards the Atiku Abubakar family since reports of the illegal and intimidating raid of Aliyu and Mustapha’s apartment” Mr Ibe said. “They are now tunning around to cover up their political witchhunt.”

“It is better for them to tell Nigerians that they mistakenly raided the apartment of the Atiku Abubakar’s sons while they were looking for Theodore Orji’s sons, but to outright deny going after Aliyu and Mustapha in search of imaginary dollars is uncharitable and insulting to the intelligence of Nigerians as a collective,” Mr Ibe said.

Security Analysts to honour Olonishakin with award of excellence