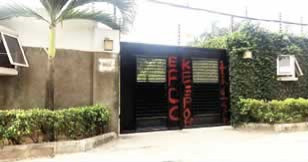 The Economic and Financial Crimes Commission (EFCC) has seized some houses belonging to the Senate President, Bukola Saraki.

According to reports, the houses are said to be located at 15a, 15b and 17, MacDonald Road, Ikoyi, Lagos.

This development comes after the EFCC recently opened a fresh probe into Saraki’s activities while he was governor of Kwara State from 2003 to 2011. The EFCC in a statement sent to the Kwara state government, said that Saraki is to be investigated for an alleged case of conspiracy, abuse of office, misappropriation of public funds, theft, and money laundering.

The houses that were recently seized, were part of Saraki’s trial before the Code of Conduct Tribunal (CCT) at the beginning of his Senate Presidency. The suit was later dismissed for lack of evidence.

Confirming the sealing of the property, Saraki’s spokesperson, Yusuph Olaniyonu, in a statement released, said

“Our attention has been drawn to the fact that the Economic and Financial Crimes Commission (EFCC) has marked certain property belonging to Senate President, Dr. Abubakar Bukola Saraki, obviously under the claim that they are subjects of investigation.

“The action of the EFCC only reinforced our earlier stated position that their current investigation is mischievous, contrary to the tenets of the rule of law and only aimed at settling scores.

“This position is founded on the fact that these same buildings were the subject of earlier investigations by the EFCC, as well as the case initiated by the Federal Government at the Code of Conduct Tribunal.

“Also, the case went all the way to the highest court in our country, the Supreme Court of Nigeria. In that case, Dr. Saraki was discharged and acquitted because the courts believe the government has no case.”

There are claims that the EFCC is keeping Saraki under surveillance before May 29th when he will be asked to come forward for questionning.