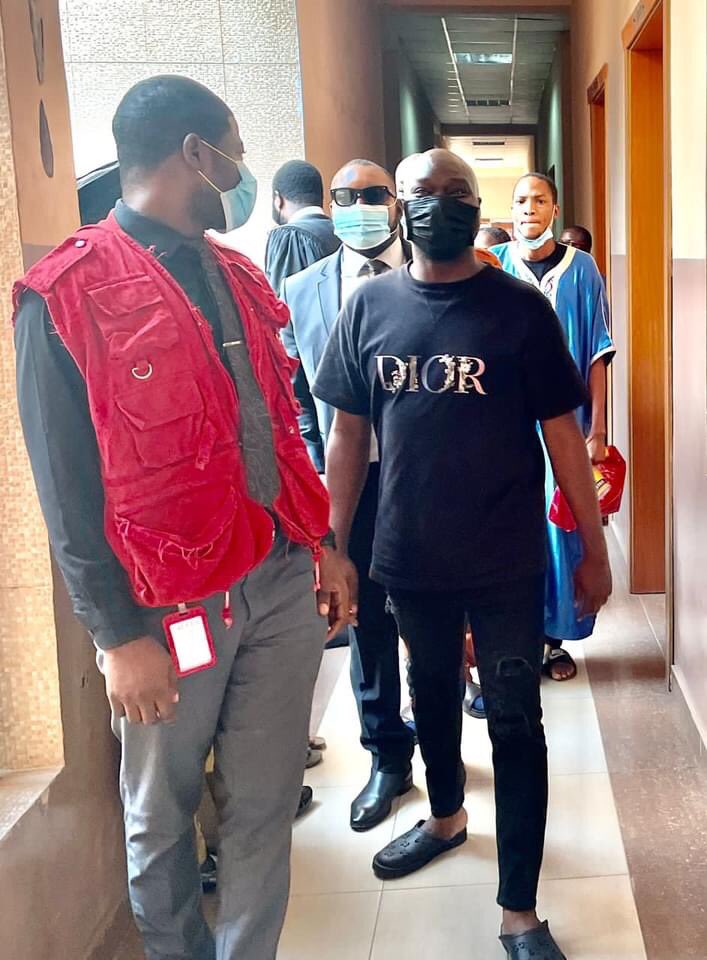 The Economic and Financial Crimes Commission (EFCC) Wednesday arraigned a Dubai-based internet celebrity, Ismailia Mustapha, aka Mompha and his firm, Ismalob Global Investment Limited for alleged money laundering to the tune of over N6billion.

The agency arraigned Mompha and Ismalob before Justice Mojisola Dada of an Ikeja Special Offences Court on eight counts bordering on the offences.
The counts were conspiracy to launder funds obtained through unlawful activity, retention of such funds, transfer of funds for a suspect Olayinka Jimoh a.k.a Nappy Boy, and unlawful transfer of funds for a record label, among others.

The sums named in the charge seen by The Nation are N5,998,884.653.18, N32million, N120million and N15,960,000, totalling over N6billion.
The EFCC also alleged that Mompha concealed his interest in expensive wristwatches and an iPhone valued at over N70million.

Following his plea, prosecution counsel, Mr. Rotimi Oyedepo applied for a trial date.
But Mompha’s counsel Mr. Gboyega Oyewole (SAN) informed the court that he had filed a bail application and same had been served on the prosecution.
Responding Oyedepo prayed for time to respond to the application.

After entertaining the submissions of counsel Justice Dada remanded Mompha in EFCC custody pending the hearing and ruling on his bail application on January 18, 2021.

In count 1, the defendants are accused of conspiracy to launder funds obtained through unlawful activity contrary to the Advance Fee Fraud and Other Fraud Related Offences Act, 2006.

According to the particulars of the offence, both defendants “sometimes in 2016 in Lagos conspired to conduct financial transactions to the tune of N5,998,884.653.18 with the intent of promoting the offence of Obtaining by false pretence.”

In count 2, they were accused of laundering of funds obtained through unlawful activity contrary to Section 7 of the Advance Fee Fraud and Other Fraud Related Offences Act, 2006.

In particular, the EFCC claimed that the duo, on or about the 28th day of January 2019, in Lagos with the intent of promoting Olayinka Jimoh a.k.a Nappy Boy in the carrying on of unlawful activity, conducted financial transactions in the aggregate sum of N32million “which sum involves the proceeds of a specified unlawful activity to wit: Obtaining money by false pretence.”

The third and fourth counts alleged that on or about January 22, 2019, and February 11, 2019, they retained control of the aggregate sums of N32m and N120m on behalf of Olayinka Jimoh, & Nappy Boy “which sum you knew to be proceeds of the said Olayinka Jimoh’s criminal conduct”, contrary to Section 17 of the EFCC Act, 2004.

Similarly in count 6, they allegedly on February 13, 2019, transferred N20m to Wisegate Sleek System “which you knew was derived from an offence to wit: Obtaining by false pretence.”

In count seven, the agency alleged that Mompha was found in possession of documents containing false pretence contrary to section and S(1) of the Advance Fee Fraud and Other Fraud Related Offences Act. 2006
In particular, it was alleged that he had in his passion “a document containing false pretence titled SELECT MILK PRODUCER JP Morgan’, used to defraud Continental Dairy Facilities Southwest LLC which document you knew to be false.”

The last count accused Mompha of “failure to disclose assets and properties contrary to section 27 (3) (c) of the Economic and Financial Crimes (Establishment) Act, 2004.

The items he allegedly “failed to furnish any information in relation to your interest in expensive wristwatches and other movable assets were: “ROLEX OYSTER PERPETUAL WRISTWATCH, AUDEMARS PIGUET WRISTWATCH. AUDEMARS PIGUET-J46220 WRISTWTACH, XY HUBLOT-1321920 WRISTWATCH, XY HUBLOT-924206 WRISTWATCH and iphone 8 with serial no. CBPVF1KJC6C, worth over N70million.”
Mompha is also standing trial at the Federal High Court in Lagos alongside Ismalob Global Investment Limited on an amended 22-count charge bordering on cyberfraud and money laundering to the tune of N32.9bn brought against him by the EFCC.
He pleaded not guilty to each of the counts.