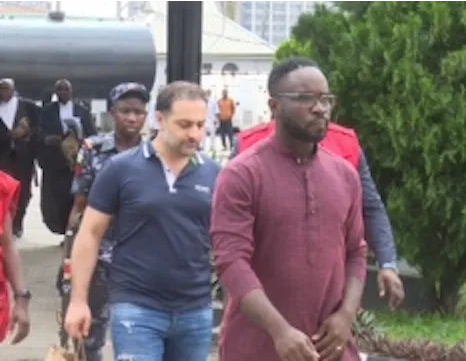 A second associate of Ismaila Mustapha, a k.a Mompha made a surprise appearance in court on Monday, November 25 alongside the more well-known Hamza Koudeih who was arrested in a high brow apartment in Banana Island, weeks ago.

Their trial could however not kick off, unlike Mompha’s own, who was charged separately and who pleaded not guilty to a charge of N33 billion money laundering and running a foreign exchange business without the authorisation of the Central Bank of Nigeria. Mompha has been remanded in prison custody.

Justice Muslim S. Hassan of the Federal High Court sitting in Ikoyi adjourned the arraignment of Mompha’s accomplices till November, 28, 2019. The EFCC did not indicate when the bespectacled Phillip was arrested and where. When the matter was called today, Koudieh’s counsel, Abdulhamid Mohammed told the court that he was only informed of the arraignment earlier in the day and didn’t have a copy of the charge.

He pleaded with the court for a short adjournment to enable him study the charge and prepare his client before the plea is taken. “I am not adequately prepared for the plea to be taken in respect of the 2nd defendant and I humbly urge the court to adjourn this matter to the earliest possible date”.

The prosecution counsel, Rotimi Oyedepo opposed the application, arguing that the plea relevant to jurisdiction of court was not that of the counsel. Rotimi relying on S271(2&3) of the Administration of the Criminal Justice Act, stated that the defendant had been served with the charge and he knows what to do with it.

He therefore urged the court to discountenance the prayers of the defence and allow his plea to be taken. Justice Hassan however adjourned the matter until Thursday November 28 for arraignment. Phillip and Hamza, both accomplices of Ismaila Mustapha (aka Mompha) will be tried on a 24- count charge bordering on conspiracy and money laundering.