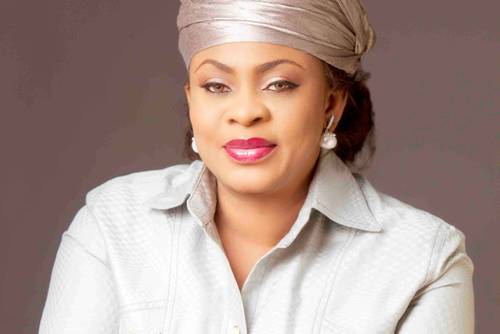 She was grilled for about eight hours by detectives over a N9, 443,549,531.25 contract awarded to I-Sec Security Nigeria Limited for the procurement and installation of security equipment in 22 airports.

She showed up as the agency got set to declare her wanted.

A United States (U.S.) firm, Psybernetix Limited, has alleged that the ex-minister hijacked the contract for a firm in which she has a stake.

of the US company to testify against Mrs. Oduah, it was learnt yesterday.

According to a source, Mrs Oduah, who arrived at the EFCC Abuja office at about 11am, was immediately taken to a team of detectives for interrogation.

The source, who pleaded not to be named, said: “After shifting many appointments in the last 10 months, Sen. Stella Oduah came for grilling on the N9, 443,549,531.25 contracts awarded to I-Sec Security Nigeria Limited for the procurement and installation of security equipment in 22 airports across the country.

“We invited her since 13th June, 2017 but she kept giving excuses. We were about to declare her wanted when she appeared before our team.

“The allegations against her include non-execution of the project in some airports, abandonment of the contract in a few ones, diversion of part of the contract sum and suspected case of money laundering.

“We have taken her statement and from this preliminary interrogation, she will still need to come again because many people and organisations are coming up with figures.”

The firm, in a status report obtained by The Nation, said: “We are a successful and experienced US-based Firm of National security Consultants, with projects across the world.

“We also have an office in Abuja, amongst other strategic world capitals. Aviation Security, being one of our areas of practice, we wrote the 88-page proposal for the Nigerian project under reference, spent millions of dollars bringing in various experts to make presentations in Nigeria, local logistics, travel, and sundry fees.

“Our senior executives lived at the Abuja Hilton for over a year, working exclusively on securing these contracts.

“We still have the original award letters, but we had to walk away from the projects two days to the full (100 %) disbursement of the contract value, as approved by the President in writing, because of the outrageous, brazen, extortionate, and criminal demands made.

“The question that should interest all serious-minded people should be: Why did Psybernetix that had spent a lot of money and time chasing these two contracts reject the contracts two days before the full payment for the first contract (N9.4 billion) was to be made?

“ We wasted a year and a lot of money chasing these opportunities, but our principles dictated that we should not accept Ms. Oduah’s demands.

“One of her principal demands was to engage a newly-incorporated company with zero experience in Security, Program Management, Project Management, or Global Logistics, as our technical partners. On what basis really? What impudence?

“ She also wanted us to issue post-dated cheques totaling several billions of Naira in favor of this her preferred company (I-Sec Ltd, as well as Zuren Ltd), front companies belonging to her friend and business partner, Walter Wagbotsama.

“This man has just been jailed in the UK for international money laundering and fraud. His associates are still in Nigeria, and we know them all. We know her bankers and all their modus operandi. These details have been shared with our Attorneys in the US and Nigeria, as well as certain law enforcement agencies in the US.

A few valid and germaine posers:

“• We refused outright to have anything to do with Stella Oduah’s companies, especially I-Sec (a company that was hastily incorporated to perpetrate this fraud). This company had zero Security, Program Management, Project Management, or Global Project Execution experience, so, on what basis would a company of our stature and reputation engage them as our technical partners?

“• It will be appropriate to see the so-called (obviously forged) document(s) purporting to reflect this so-called technical partnership. We can easily provide our standard letterhead and specimen signatures as well as our standard Technical Partnership Agreement, for easy comparison, if required.

“•Can Stella Oduah and her cohorts please provide the documents evidencing the approvals and contract awards to I-Sec? We have ALL our documents, and there is zero mention of I-Sec on any of them.

“When we rejected the contracts, she altered and forged documents, and unilaterally awarded the contracts to I-Sec Ltd; this was her preferred position ab initio.

“Can Stella Oduah provide documents to show that the President, FEC, BPE, etc., approved the formal transfer of the contract to I-Sec? She cannot, because no such approvals were sought or obtained. She arbitrarily and fraudulently converted our rights under the contracts to her front company, I-Sec Ltd., on the false, criminal, and wicked representation that they were our Technical Partners !!!

“Even if theoretically, there was ANY technical partnership between the two companies (and there was none, as I-SEC had zero value to add to us, and we had determined that I-SEC was clearly incorporated by Stella Oduah and Walter Wagbotsama for the purpose of defrauding both ourselves and the Federal Government), the proper thing to do when we (the sole awardee of the contracts) reluctantly decided to forgo the contracts was to start the Procurement and Approval process all over again, and not to casually forge documents, misrepresent facts, and assign the contracts to one’s front company— a company that had zero pedigree, track record, or known to the Approving Authorities.

“Our international reputation and track record was, thus, used to secure the contracts, only for Stella Oduah’s company with zero experience to inherit the benefits. A classic case of fraud.”

Half of Dapchi Schoolgirls ‘Taken To Niger Republic’