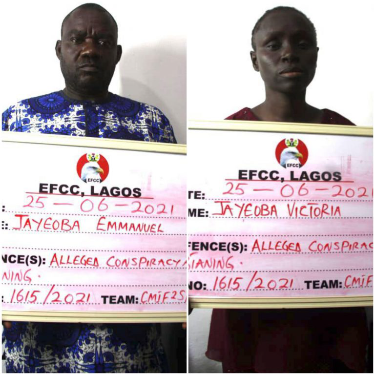 The Economic and Financial Crimes Commission (EFCC) has arrested a couple for allegedly swindling unsuspecting victims to the tune of N935 million.

The EFCC Head, Media and Publicity, Wilson Uwujaren, disclosed this in a statement in Port Harcourt on Wednesday, adding that the suspects allegedly operated a Ponzi scheme.

Uwujaren stated that the couple, Emmanuel and Victoria Jaiyeoba, were arrested in their residence in Ibadan, following petitions by their victims.

“The suspects, in complicity with their son, who is still at large, operate a Ponzi scheme in the guise of forex trading to defraud their unsuspecting victims.”

He said the suspects had received money from their victims through 11 bank accounts registered under them.

“Investigation revealed that Emmanuel, who is a Director in the company, operates five bank accounts and had received N18.398 million from his victims before his arrest.

“Further investigation also showed that the second suspect, Victoria, operates six bank accounts through which she received fraudulent transactions to the tune of N916. 607 million,” he stated.

Uwujaren further stated that the suspects would soon be arraigned to answer for their alleged crimes.