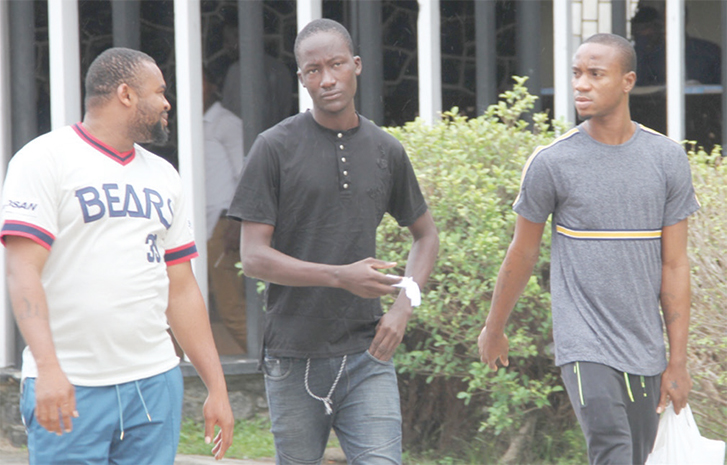 The Economic and Financial Crimes Commission, EFCC, Lagos Zonal office, on Monday, June 24, 2019, arraigned the trio of Raphael Ishado, Jacob Sunday and Raheem Shanu before Justice Chuka A. Obiozor of the Federal High Court sitting in Ikoyi, Lagos on a five-count charge bordering on possession of 10 pieces of counterfeit N1000 (One Thousand Naira )notes.

A statement from the agency says one of the counts reads: “That you, Raphael Ishado, Jacob Sunday andRaheem Shanu, sometime in April 2019 in Lagos, within the jurisdiction of this Honourable Court, conspired amongst yourselves to deal in 10 pieces of N1000 notes, knowing it to be counterfeit and there by committed an offence contrary to Section 6 (2) (b) of the Counterfeit Currency (Special Provisions) Act. CAP C35, Vol.4, Laws of the Federation of Nigeria, 2004, and punishable under Section 4 (1) of the same Act.”

The defendants pleaded not guilty to the charge preferred against them.

In view of their pleas, the prosecution counsel, I. A. Mohammed, asked the court for a trial date and also prayed that the defendants be remanded in prison custody pending the hearing and determination of the case.

Counsel to first defendant, George Turner, moved to make an oral application for bail on behalf of his client.

However, the prosecuting counsel, I.A. Muhammed, opposed the motion, saying the defence counsel had to file for a bail application to allow him respond accordingly.

Counsels to the second and third defendants, Theophilus Idenhen and V.E. Emeruwa respectively, prayed the court for a short date for the hearing of bail applications on behalf of their clients.

In his ruling, Justice Obiozor held that the circumstance of the matter did not permit an oral application for bail.

Justice Austin Obiozor adjourned the case to July 2, 2019 for hearing of the bail application and commencement of trial.

The defendants were ordered to be remanded in Ikoyi Prison.