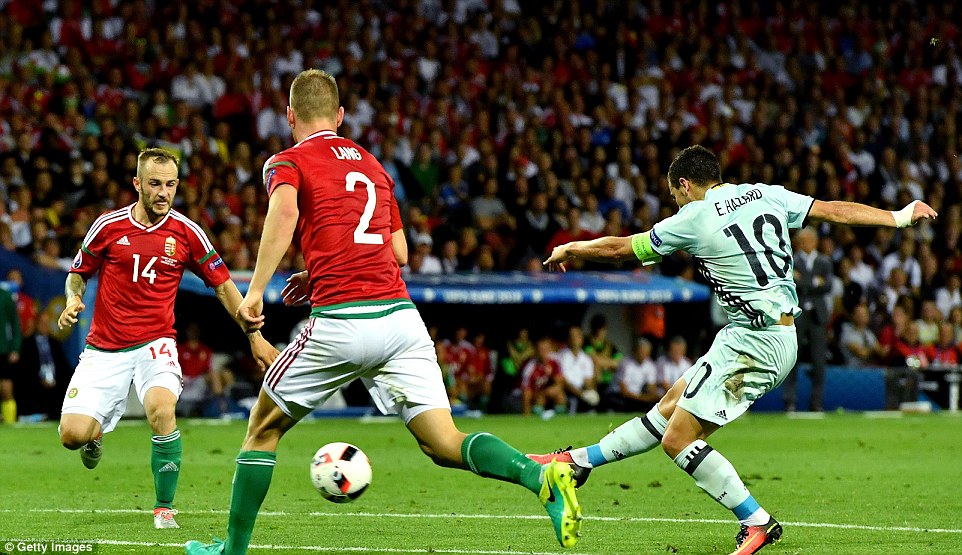 Eden Hazard led by example as he fired Belgium into a quarter-final showdown with Wales with a stunning performance in Toulouse on Sunday night.

The Chelsea forward and Belgium captain was star of the show as the Belgians finally showed why they are ranked number two in the world, and are among the favourites to win Euro 2016.

After Toby Alderweireld got Belgium off to a flying start with a thumping header in the 10th minute, Hazard set up substitute Michy Batshuayi to make it 2-0 in the 77th minute and then added a brilliant third goal himself two minutes later, before Yannick Carrasco completed the rout late on.

Belgium coach Marc Wilmots said: ‘A lot of people were amazed when I gave the captain’s armband to Eden Hazard, but you have to let this little man grow. He doesn’t say a lot, but his football does his talking on the pitch. It was almost impossible to take the ball off him tonight.’

It was a sensational display by the Belgians, who will now face Wales in Lille on Friday. Only the goalkeeping of Hungary’s keeper Gabor Kiraly kept the scoreline down, although the Hungarians played their part in a cracking game and could have scored themselves.

But it was Belgium who started quickly when Alderweireld scored after only 10 minutes.

Kevin de Bruyne had already set up a chance for Romelu Lukaku that was well saved by Kiraly, who then dived to save another long shot by the Manchester City midfielder.

But when De Bruyne was fouled on the left, 20 yards from goal, he took the free-kick himself and curled it towards the far post, where Alderweireld was waiting to nod home from close range.

Alderweireld scored four times for Spurs last season, but this was only his second goal in 59 outings for Belgium.

It could have been 5-0 by half-time but for Kiraly, the Pyjama Man as he is known for his baggy grey tracksuit bottoms.

He kept De Bruyne at bay with a close-range stop, and then saved well from Dries Mertens, who was through on goal but shot straight at the keeper.

Kiraly also held a tame header from De Bruyne, who was running the show along with Eden Hazard.

But the Hungarian keeper made his best save shortly before half-time when he kept out a piledriver from Mertens at point-blank range, with Adam Lang deflecting the follow-up shot from Hazard wide.

But it was not all one-way traffic. Hungary were disrupted from the start when star midfielder Laszlo Kleinheisler was injured in the warm up and had to be replaced by Adam Pinter.

Zoltan Gera had promised before kickoff that the Hungarians would shoot on sight from any range and they were as good as his word. Gergo Lovrencsics tried his luck three times in the first-half, the closest sailing just over the bar from 25 yards.

Skipper Balazs Dzsudszsak, who scored twice against Portugal from long-range, also went close twice, drawing a good save from Thibaut Courtois and then going just wide of the post as the Hungarians chased an equaliser.

Bernd Storck’s men really upped the pace after the break, though not before Kiraly made another brilliant stop to tip over a curling effort from Hazard.

But Hungary, roared on by their noisy fans, fought back. Adam Szalai, who’d scored against Austria in their first game, had a great chance early in the second half but his shot was high and wide from a tight angle.

Thomas Vermaelen then had to head away for a corner with the burly former Real Madrid striker waiting to pounce as the game opened up.

Hazard fizzed a low cross into the area, but Mertens could not control the ball and it flew off him over the bar from close range.

Alderweireld almost scored an own goal when he deflected substitute Akos Elek’s shot towards the roof of his own net, but Courtois made an acrobatic save to keep the ball out. Hungarian defender Roland Juhasz almost got in on the act, with scored with a fizzing half-volley that flew just wide of the far post.

But Hazard raced down the left to cross for Batshuayi to drill home from close range, and then the Chelsea midfielder shot past Kiraly after a weaving run from the left. It was effectively game over, although substitute Yannick Carrasco rounded it off after running through in the final minute to make it 4-0.