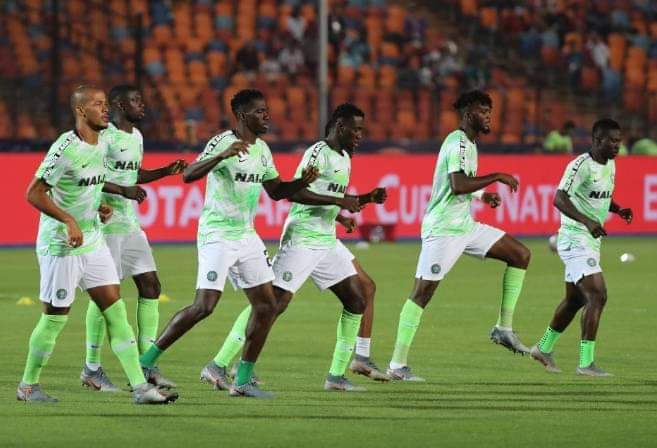 Super Eagles will begin training in Vienna, Austria, today.
The Super Eagles’ camp will open today in Vienna, Austria ahead of Nigeria’s international friendly matches against Algeria and Tunisia this weekend.
The warm up games are expected to keep the Eagles in top shape for the African Cup of Nations scheduled for November.
The Nigeria Football Federation (NFF) said the players are expected to start arriving camp from tomorrow after representing their clubs in their league matches at the weekend.
Super Eagles Media Officer, Toyin Ibitoye, disclosed that some NFF officials and assistant coaches Alloy Agu and Joseph Yobo arrived in Austria on Saturday to join the team’s manager, Gernot Rohr, preparing the camp ahead of the players’ arrival.
He also said the players are all fit for the task, adding however, that the doctors would still examine them on arrival to camp.
“Training will start on Tuesday once the coaches get enough number of players. Some of the invited players played league games for their clubs at the weekend, so the coaches will put that into consideration on the players’ arrival schedules. Every arrangement for the game is taken care of,” he said.
Yesterday, the NFF announced that Genk of Belgium striker, Paul Onuachu, would replace Victor Osimhen in the squad due to COVID-19 scare coming from Osimhen’s club, Napoli.
According to reports, Napoli players, Piotr Zielinski and Eljif Elmas, tested positive for COVID-19 after the Italian club’s 6-0 defeat of Genoa FC last Sunday.
As a result of the positive result, the entire Napoli squad, including Osimhen, will self-isolate for 14 days to guard against possible spread of the virus.
Recall that 14 Genoa FC players tested positive for COVID-19 after the Serie A game in which Oshimen played 90 min.