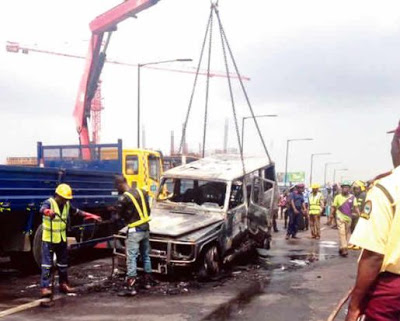 “We saw driver packing burnt cash from vehicle” – Traffic officer
Governor Ayodele Fayose of Ekiti State escaped death by a whisker on Tuesday after fire consumed his Mercedes-Benz G-Class on the Oshodi-Apapa Expressway in Lagos.

It was gathered that the vehicle had just had a lone accident when the governor fled it and escaped into another car which was in his convoy. 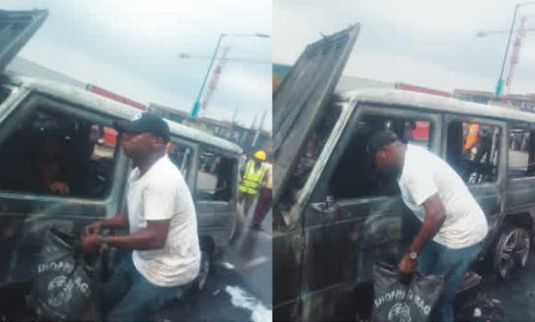 According to Punch, a traffic official and witness said the driver of the G-Class, who waited behind until the fire was put off, later went in to pack some burnt N500 notes and other items in the car.

He said, “The accident happened around 1.30pm on the Oshodi-Apapa Expressway inward Airport Road. It happened on the Oshodi bridge, not too far from the LASTMA’s headquarters.

“We cannot tell the exact cause of the fire. We gathered from those at the scene that the governor was in the G-Class when the accident happened and he quickly escaped into another car in his convoy.

“On getting to the scene, we saw the driver who tried to cover his face with a Fez cap. He watched helplessly as the fire raged on. We alerted the state fire service and LASEMA. The LASEMA response unit had to take one way to access the accident scene because the road was blocked because of the inferno.

“On arrival, they were able to douse the fire. The vehicle was seriously burnt. The driver did not talk to anybody. We saw as he started packing some of the burnt cash in the car. They were N500 notes. He packed the money with some other items into a polythene bag. This was in the presence of traffic officials and the police. We later cleared the traffic as the carcass of the car was towed away by LASEMA.”

But the Special Assistant to Fayose on New Media and Public Communications, Lere Olayinka, said the governor was not in the car.

In a statement he issued on the incident on Wednesday, he explained that Fayose was heading for the Lagos airport when the car got burnt. He said the cause of the accident remained a mystery.