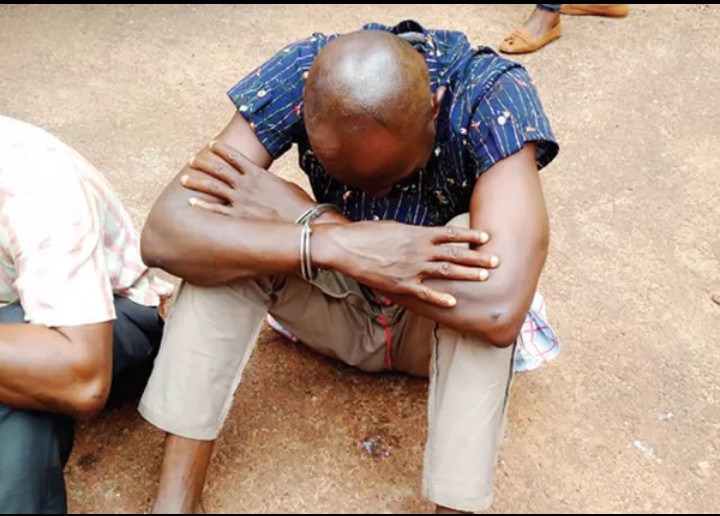 A Deputy Superintendent of Prisons in the Nigerian Prisons Service, Mr
Collins Ugwu , has been arrested by the police in Enugu for an alleged involvement in armed robbery.

Ugwu, a native of Ezza in Ebonyi State, who resides in Abuja, where he works at the headquarters of the Nigeria Prisons Service, was nabbed in Enugu on June 26.

The senior prisons officer was arrested with suspected accomplices, Ifeanyi Ozor, a native of Enugu State who is also resident in Abuja; and Smart Osetu from Oguta in Imo State.

The Commissioner of Police, Enugu State, Mr. Mohammed Danmallam, disclosed, while parading the suspects, that apart from armed robbery, the prisons officer and his gang were also involved in conspiracy, malicious damage, stealing and ‘obtaining by tricks.’

The Enugu police chief revealed that Ugwu and his colleagues were apprehended after the police gathered intelligence information on their activities.

According to him, the gang stayed around the premises of commercial banks to monitor prospective victims who had come to withdraw money.

Danmallam said, “The suspects (Ugwu, Ozor and Osetu) belong to a syndicate that specialises in monitoring anyone that has gone to bank to make withdrawals and trail them to a point where they can smartly force the door or the windscreen (of the victims’ car) open with their instrument and steal the said amount.

“They are also part of a syndicate that buys goods from traders and generate fake payment alert to the owner of the goods without him knowing.

“They were nabbed along Ogui Road, Enugu by the operatives of the Enugu State Police Command on June 26, 2018, following intelligence information gathered concerning their nefarious activities.”

Items recovered from the suspects, according to Danmallam, include a Golf car with registration number Abuja RBC 220 KF, and a broken plug which they allegedly use in “scratching down” the window of the car to steal from their victims.

Ugwu rebuffed attempts by journalists to get him to explain why a deputy superintendent of prisons would venture into armed robbery and other criminal activities, especially after witnessing, from close quarters, the harsh treatment meted out to criminals in Nigerian prisons, where they are compelled to live in sub-human conditions.

Sitting quietly on the bare floor, Ugwu refused to respond to questions.

He also bowed his head to prevent journalists from taking pictures of his face.

Our correspondent observed that although he was handcuffed like other suspects, Ugwu looked ‘fresher’ than his colleagues.

The police commissioner further explained that Ugwu and the other suspects were helping the police in their investigations and would soon be charged to court.