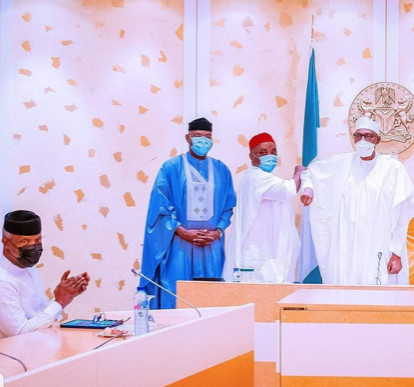 Peter Nwaoboshi, the Peoples Democratic Party (PDP) senator representing Delta North District at the National Assembly, has formally defected from the PDP, to the All Progressives Congress (APC).

In a statement by Garba Shehu, senior special assistant to the President on Media & Publicity, on Friday, said the president heartily welcomed the senator “to the progressives family.’’

We gathered  that the Delta Chapter of the PDP State Working Committee (SWC) on Wednesday slammed a one-month suspension on the senator over alleged anti-party activities.

The suspension notice was contained in a statement from the party’s spokesperson in the state, Ifeanyi Osuoza.

Nwaoboshi had castigated the Delta State governor, Ifeanyi Okowa administration on Sunday when he played host to some of his supporters at his country home in Ibusa, Oshimili North Local Government Area, saying, “Urhobo and Itsekiri governors performed credibly well than our own Anioma (Delta North) governor.

“What has the Anioma governor done for Asaba people to show that he loves Asaba more than the Delta Central people?”

Sanwo-Olu: Celebrating A Kind Hearted Achiever at 56 by Gboyega Akosile.