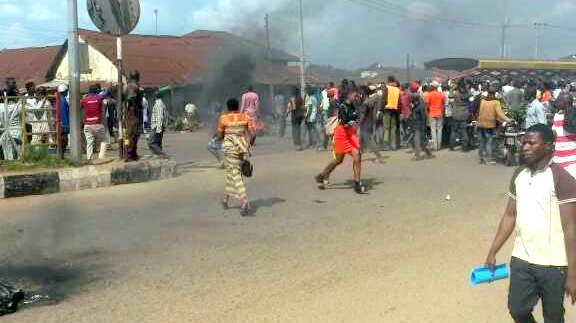 Akure, the capital of Ondo State, erupted in a violent protest on Wednesday following the death of a commercial motorcyclist who was knocked down by an official of the Nigeria Security and Civil Defence Corps.

Thousands of Okada riders began a protest in the city bearing the corpse of their colleague and attempted to match to the office of the NSCDC located at Alagbaka area of the capital, but were dispersed by a combined effort of the police and the NSCDC personnel.

In the course of the protest and efforts by security to dispersed the protesters, a woman, said to be a sibling of the dead Okada rider, was hit by a stray bullet. The woman died.

The double tragedy escalated the already charged atmosphere as the protesters vowed to kill any official of the NSCDC in revenge.

The protest was later taken to the Oba Adesida Road where demonstrators disrupted vehicular movement and set up bonfires on the expressway.

It was gathered that the NSCDC official who is yet to be identified, had a collision with a motorcycle carrying two passengers on Tuesday evening causing injuries to those on the bike.

The official was said to have taken the injured to the state hospital for treatment, but the rider of the motor bike did not survive the accident.

Women and commercial motorcyclists in the course of the protest, hijacked a vehicle belonging to the Ondo State task force with which they used in conveying the two corpses to the governor’s office at Alagbaka-Akure.

Police Public Relations Officer, Femi Joseph, said the police was investigating the matter and would ensure justice was done.

He however said the woman was shot dead by a stray bullet at the office of the NSCDC.

But the NSCDC has denied that any of its official fired the shot that killed the woman.

The corps’s spokesman, Oladipo Samuel, said that the protest was not allowed to proceed to the corps’s office and so the shooting could not have taken place at its office.

“One of our official was involved in an accident with an okada rider carrying passengers on Tuesday evening. He took them to the hospital, but the okada rider died,” Mr Samuel said.

“While we were making efforts to reach the deceased’s family and begin a discussion with them, the okada riders hijacked the whole thing and started a protest.”

He said the official was not attached to the Akure command of the NSCDC but works in Abuja.

“We know of the okada man that died, we do not know how the other person was shot and killed,” Mr Samuel added.

He also noted that the official involved in the accident was not riding an official vehicle but was in his private vehicle and was in Akure to take an exam.

The situation in the city was however brought under control following the intervention of the state government and the deployment of soldiers.

Theresa May speaks on experience in Lagos, Nigeria