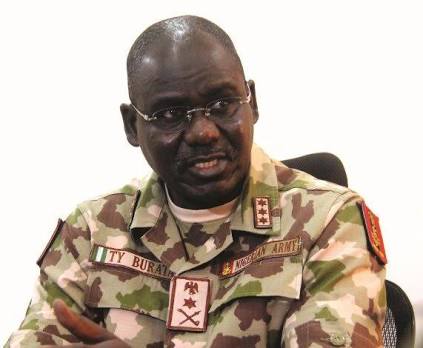 Nigerian Army on Sunday said one Sergeant David Bako who was alleged to have deserted the Army and took part in the abduction of Dapchi girls with N80 million is not a personnel in the Army.

The Army added there is no record of a Sergeant David Bako in their database whether deserted, dismissed or still in service and so the said individual cannot be telling the truth.

In a statement signed by Brigadier General Texas Chukwu, the Director of Army Public Relations, he added that the Nigerian Army disassociate itself from such fictitious report.

He called on the public to disregard the confession made by the so called Sergeant David Bako who has never been in the Army at all.

The Army said that the news report making round on Facebook and other social media were to smear and drag the Nigerian Army into a politics of calumny by mischief makers.

The reports alleged that one Army deserter, Sergeant David Bako leaked how the Dapchi Girls abduction was planned in the villa and executed with N80 million.

The information was said to be provided by Sergeant David Bako who claimed to be deserted soldier and one of the abductee of the Dapchi School Girls.

?The statement reads part, ” It is imperative to know that these baseless and inane allegations are not new in the cyber space, knowing the fact that we are in the age of information warfare.

“Based on our findings the website was registered on the 14 of April 2017 and the last updated was on the same date and will expire on the 14th April 2018, we are very familiar with reports of this nature and will advice the general public to disregard such claim and desist from sharing such information on the New Media as this is against the Nigerian Cybercrime Act 2015?.

” However, it is really worrisome to the level at which some people could condescend so low to fabricate facetious allegation against the Nigerian Army and the military at large for cheap political gains or simply an act of pure wickedness, thus the public should disregard such facetious allegation.
The Nigerian Army wishes to reiterate its commitment to remain apolitical and non-partisan in the discharge of its constitutional roles.

” We would also like to reaffirm our unconditional support and obedience to civil authority as well as reassuring Nigerians that these Fifth columnists will not succeed in their mischief as they will be fished out and dealt with accordingly.