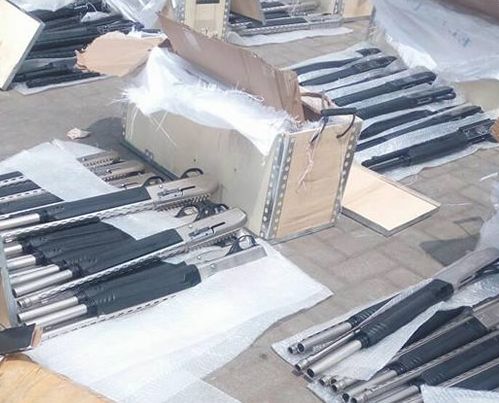 Again, the Tin-Can Island Command of Nigeria Customs Service (NCS) has intercepted another 2,671 rifles illegally imported into Nigeria. The guns are alleged to have been imported from Turkey through profiling approach.

But what are these people really up to?
The Comptroller-General of NCS, Col. Hameed Ali, told journalists in Lagos on Thursday that the seizure was the fourth at the Lagos ports within eight months.

“Following the increase in the number of arms seizures in recent times, the Customs Area Controller of Tin-Can Port, Comptroller, Yusuf Bashar, ordered a detailed profile of all imports, especially those coming from Turkey.

“Customs decided to follow profiling approach of 100 per cent examination on containers, especially those containers coming from Turkey.
“Tin-Can Customs command intercepted another 20ft container No CMAUI817/8 containing 470 pump action rifles, immediately the container landed from the port of origin to Nigerian ports.’’
The terminal operators have been was consequently directed to quarantine the container for analysis.
“The container was later transferred to the Enforcement Unit of the command where 100% examination revealed 470 pump action rifles,” Ali said.
He said that the Bill of Lading of the container indicated Elbow Plumbing Plastics.
According to him, the importer of the cargo is Great Oil and Gas Ltd and the vessel named “MV Arkas Africa” owned by Hull Blyth.
He said that the NCS would now be responsive and capable of meeting the challenges being posed.
Col. Ali urged Nigerians to rise up and remain vigilant to deal decisively with enemies of the country. 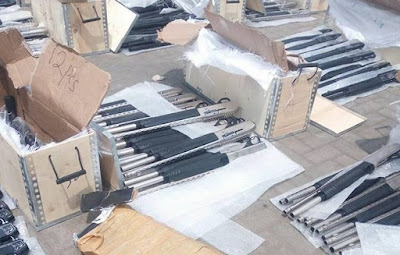 He, however, said that since the container belonged to the same importer of 1,100 refiles intercepted on Sept.11, investigation was on-going to fish out those connected with the container.
Related Topics:
Up Next

We Are For One Nigeria – Igbo Community