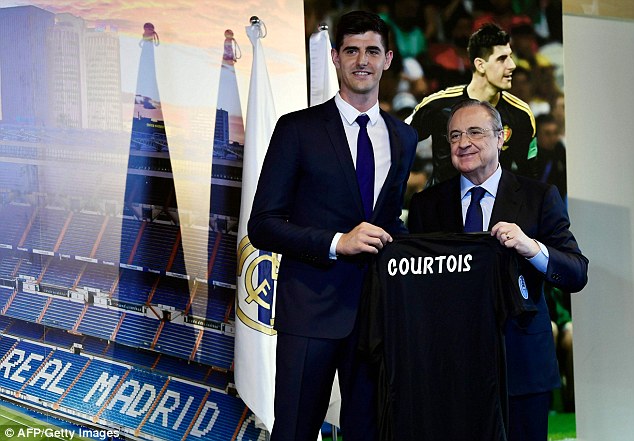 Thibaut Courtois kissed the Real Madrid badge and then spoke about Eden Hazard joining him at the Santiago Bernabeu one day, before doing his best to diffuse bad feeling with his former club Chelsea.

‘He is happy that I have arrived because he knew it was my dream,’ he said revealing Hazard had called him to congratulate him.

He then added: ‘He is a great player and if he could come here one day it would be fantastic.’

None of that will have done relations with his former supporters much good but when asked if he had a final message for them the 26-year-old Belgium international said: ‘I know at the moment they are not too happy [with me] but I hope remember what was achieved.

‘I want to thank them for the years I was there. It was my goal to win a Premier League and I won it twice so I’m really proud of that. I just felt I needed a new challenge.’

He was also asked about another former club Atletico Madrid and the suggestion he might have moved back there.

He said: ‘My objective was to come here. I have maximum respect for Atletico but now I’m at a club that I have always wanted to be at. I don’t think I’ve ever kissed a badge before.’

He did have to apologise to Real Madrid fans for a song he sung about the club when he was at Atletico.

Asked about singing anti-Real Madrid songs on the balcony of Madrid’s town hall during celebrations of Atletico Madrid’s Copa del Rey final victory over Jose Mourinho’s Real Madrid in 2013, he said: ‘I have apologised and I apologise again. It was something you do when you are young.’

‘I was more a kid in my last spell in Madrid. I am more mature now, more of an adult. I won two leagues with Chelsea and that has helped me to grow up.’

Courtois had surprised Real Madrid supporters inside the Santiago Bernabeu to watch his presentation when he said he had always been a Madrid fan. Asked to elaborate he said: ‘There is always one club that strikes you when you are young and for me it was this club because of the goalkeeper they had. Madrid played Anderlecht in 2002 and I was 10 and I had an Iker [Casillas] jersey.

‘He was 18 when he started playing for the team and he coped with all that pressure. I was the same because I started at Genk when I was 17 and 18 at Atletico Madrid.’

Courtois said his Belguim team-mate Hazard has congratulated him on his move. The two had seemed destined to move together this summer but Chelsea priced the midfielder out of Real Madrid’s reach.

‘I had a lot of offers and I have had better offers financially but once Madrid came in there were no doubts for me,’ added Courtois.

He was not given the number one shirt during the presentation but he said he has no problem competing with Keylor Navas who says he will not leave Real Madrid this summer instead vowing to stay and fight for his place.

Courtois said: ‘No one needs to give me guarantees that would be a mistake because I have to show that I’m the best one to play. No club I have been at has given those guarantees.

‘When I arrived at Chelsea I had to replace Petr Cech. Goalkeepers are friends in the dressing room. They form their own group. I have come to compete with the other keepers here and help Madrid compete.

‘I still don’t know what number I will take. The club will decide which number. The most important thing for me is to be here.’

Courtois had earlier called Real Madrid ‘the best club in the world’ as he was presented to reporters by president Florentino Perez.

The 26-year-old also paid tribute to the mother of his two children and was joined by them on the stage with club president Florentino Perez.

‘Arriving at the best club in the world makes me very happy. I have always given my best and will continue to do that,’ Courtois said.

‘I dreamed of this moment when I was a kid. I have been a rival player here. Now I’m one of yours and I cant wait to wear the badge. Thanks to the president, my representatives, and my children and their mother. Even though we are not together she is still very important to me.’

Thibaut Courtois’ badge-kissing could come back to bite him in the backside after a video re-emerged of him during a celebration parade while at rival club Atletico Madrid.

The new Los Blancos stopper grabbed the microphone after Atletico had beaten their city rivals 2-1 in the 2013 Copa del Rey final and sang to his adoring fans.

The Spanish song which was sung by Courtois five years ago takes a dig at Atletico’s city rivals. And with the latest revelation of him kissing the badge, it possibly seems a little disingenuous now.

Courtois was then joined on stage by Marta Domínguez and his two children Adriana and Nicolas.

President Perez referred to Chelsea as a ‘club amigo’ and said the friendly relationship between the clubs helped the deal go through.

The move appears to have brought delight to the Courtois family, but has ruffled a few feathers among Chelsea supporters.

Courtois had to take down an Instagram post saying goodbye to the club after it provoked a furious reaction.

While the post and all comments were removed after just half an hour, Courtois was also criticised by fans on Chelsea’s Twitter post confirming his departure.

One Twitter user said: ‘Good bye, you won’t be missed.’

Another said: ‘Good riddance,’ as many Chelsea fans vented their anger at the Belgium keeper.

Former Blues skipper John Terry was also forced to disable comments on a post which praised the keeper.

The Belgium international has completed a £35million move to the Champions League winners, with Chelsea confirming the signing of Athletic Bilbao keeper Kepa Arrizabalaga to replace him for a record of £72m.

Terry called Courtois ‘the best keeper in the world’ in a tribute, but switched off the comment function on the post.

In a post on Thursday morning, Terry said: ‘Good luck Thibaut Courtois in your new chapter at Real Madrid. A great man and for me the best keeper in the world.

‘We welcome Kepa Arrizabalaga to our club and hope he can be as successful as you and Petr Cech.’

It gained more than 81,000 likes, but Instagram users were unable to leave comments below the photo of Courtois.